The supermarket giant has placed the first order for the Jungheinrich EJE112i lithiumion powered pallet truck, while other major retailers have the truck on trial. Jungheinrich says demand from high intensity retail and 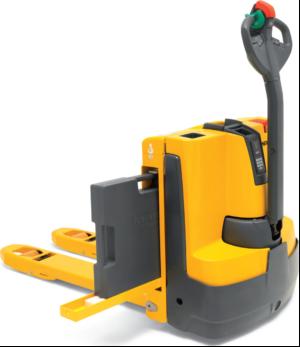 The supermarket giant has placed the first order for the Jungheinrich EJE112i lithiumion powered pallet truck, while other major retailers have the truck on trial.

Jungheinrich says demand from high intensity retail and logistics businesses has driven the release of its lithium-ion powered pallet truck. Tesco is the first such business to place an order.

Richard Ash, Tesco's corporate purchasing manager, said: "As a company, Tesco is taking up the environmental challenge and is striving to reduce carbon emissions across the business.With its low energy consumption, we believe that the new Jungheinrich EJE 112i truck could play a significant role in helping to reduce CO2 emissions across our materials handling fleet." Several lift truck manufacturers are developing low lift capacity lift trucks with lithium-ion batteries, but Jungheinrich is the only company to have released a product to market.

Jungheinrich's Bill Goodwin said he expects to see many more requests for lithium-ion powered trucks from larger customers over the next few years.

"Customers want us to add value and productivity. Lead acid has reached its limit and alternative fuels have distribution issues.

"Lithium-Ion is here now and it works. The price premium on lead acid trucks is four or five times but we estimate payback for a large, intensive warehouse operation could be three years," he added.

However, he also cautioned that users may have to change working practices to get the most out of the technology.

"We're taking a consultative approach, as companies may have to change operative break schedules to ensure that opportunity charging can be fully utilised. If a customer goes with this, they will realise considerable productivity gains." The manufacturer also sees 'back of store' as an opportunity, where users might have been put off using powered pallet trucks because of high maintenance charging requirements.

"The forklift controller needs to be optimised for lithium-ion batteries. Lithium-ion has to be designed with the truck, it is a technical build. It's not a battery that can simply be thrown in afterwards," he said.

Jungheinrich builds its own lithium-ion batteries with a partner in Germany. The manufacturer spends 40-50 million euors per annum on R&D (approx. 2.5% of turnover), and did so throughout the recession. The company says it also opened two factories during the recession (one in China, one in Germany) and did not make any UK redundancies.

Goodwin concluded: "We want innovation for our customers, and investment is key to back up our strategy to deliver 'Machines.

Ideas. Solutions'.We are able to make long term investments, are dedicated to lift trucks, and we are in it for the long haul."
MORE FROM THIS COMPANY