Translift Bend's reputation has been built by listening to the marketplace, and pouring the resulting intelligence into the company's R&D department - the 'beating heart' of Bendi, according to MD Simon Brow 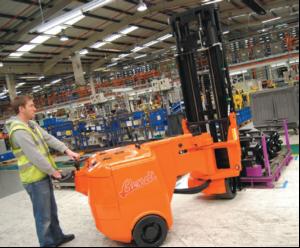 Translift Bend's reputation has been built by listening to the marketplace, and pouring the resulting intelligence into the company's R&D department - the 'beating heart' of Bendi, according to MD Simon Brow


Translift Bendi's business, perhaps more than any other player in the industry, has been built on R&D and the principles of innovative product development. Each of the company's portfolio of 18 products has been created by listening to the marketplace, disseminating industry trends and pouring the resulting intelligence into the company's R&D department - the 'beating heart' of Bendi, according to MD Simon Brown.


Bendi was responsible for building the first Man-rising combination pallet placing order picker in the 1960s which operated in VNA, then the groundbreaking Bendi later in the 1980s to work in 2400mm aisle but now easily stacks UK pallets in 1600mm aisles. Bendi continues to demonstrate its understanding of the industry's requirements for space saving solutions and efficiency.


With pedestrian control the operator is completely in charge of the equipment - providing additional safety at all times and, importantly, achieving the space-saving that Bendi trucks have become synonymous with in recent years.


The operator's position, twice as far away from the pallet compared to a traditional pedestrian truck and intuitive feedback from the truck's unique steering system enables pallets, including Euro style and UK perimeter based (Chep) variations, to be nimbly and safely placed within confined areas or narrow aisles as small as 16000mm. The large, soft wheels of the Mini Bendi allow safe travel over yards or roads, enabling deliveries to be easily unloaded and placed straight into storage. Traditional machines in this sector either have smaller wheels that struggle with these surfaces and either get stuck or spill their loads or take up too much room.


The ability to effortlessly stack pallets in 1.6m aisles puts pay to large trucks being crammed into small spaces and, according to Bendi MD Simon Brown, truly responds to the demands of the market for a smaller, more versatile articulated machine.


The European model of the Bendi has a patented articulated steering system unique to this truck. This dramatically improves the lateral, forward and backward stability of the common stacker format, allowing mast heights of the support arm Bendi to lift to 7m plus and remain stable.


This new design also dramatically improves the support arm format's ability to travel across uneven floors lending it to be capable of some external as well as internal duties. The Euro stacker Bendi is far lighter, allowing Bendi to deliver the new range at extremely competitive prices and as a pedestrian, stand-on and eventually as a ride-on model - offering complete flexibility to the European market.


Arctic Bendi
Often considered to be as the most expensive form of storage, the management of cold stores has historically been limited to using only reach trucks or very narrow aisle (VNA) solutions.


The Arctic Bendi, has an improved battery capacity over other
manufactures due to a fresh look at how the battery is
incorporated in the design. This improvement gives 20% longer
run times. Couple this with the warm cab which takes most of its
heat from the working components. This reduces battery drain
while simultaneously reducing the freeze running cost by not
emitting waste heat product from the truck into the cold store. it
also has the ability to work in 1600mm aisles without guidance
or the need for wasted transfer aisles.


Bendi B420 AC HL
With more than 20 customer-driven enhancements on the previous model, Translift Bendi's B420 AC HL (High-Lift) truck has become the company's new flagship model. Designed to give optimal aisle performance and greater space-saving over counterbalance and reach trucks, the Bendi was re-shaped to improve performance and driver comfort. "Our engineering knowhow has transformed the 420 AC model," explains Brown.
MORE FROM THIS COMPANY