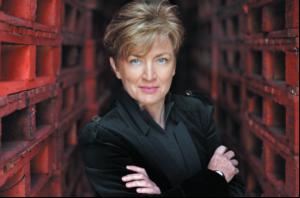 Handling & Storage Solutions talked to MAN Everywoman's Director of the Year, Jane Gorick of LPR UK about her relentless drive for greater efficiencies

La Palette Rouge (LPR) is a Europe-based pallet pooling company that brought the one way pallet trip concept to the UK eight years ago.While that concept is no longer unique, Jane Gorick, general manager for LPR UK is focused on refining its efficiency.

A key benefit is simplicity - rather than a customer bringing pallets back themselves, which can be an inefficient use of vehicles, they can drop and go.

"It's much easier for our customers, the likes of Heinz, Kelloggs, Kimberley Clark, and Nestle, and allows them to treat a pallet as a piece of packaging," says Jane. And it's not simply about handling the pallet. In fact, the information burden removed can be as significant for many companies. Jane adds: "We're dealing with our customers' data straight out of their systems. It takes a lot of intervention and paperwork out for them." The simplicity and convenience doesn't come for free of course, and outsourcing pallet operations, like any outsourcing contract, carries a premium.However, Jane says the customer that understands where its costs are can use outsourcing to save money.

"If a customer is bringing pallets back to the warehouse and has the forklift driver sorting the pallets, you need to think - can that resource be released back into the business to add greater value, or can that cost be removed?" She adds that simply by entering the market, LPR has increased competition significantly and this has brought price benefits to customers. In addition to convenience, and adding value to core activities, pallet pooling can ensure a high level of pallet quality, which is particularly key for businesses with high levels of automation. Outsourced providers can be kept to stringent KPIs and LPR is no exception.

Jane says: "We've set ourselves stringent operating standards, above those in our KPIs, such as 99.9% of pallets fit for re-use, and people said 'you're never going to do it', but we did, and we do." The ability to effectively repair damaged pallets is key to meeting this KPI, after all approximately 10% of the pallet pool ends up damaged in each cycle. LPR is constantly evolving its approach. The business has 12 sorting facilities, with most also repairing pallets.

"Initially we had repair more centralised but as the business has grown, we've seen moving pallets around as a waste of transport, so we have started a programme to have repair in all the depots." LPR also has to keep on top of fluctuations in pallets that need to be repaired. The rough average is 10% but this can vary considerably from week to week at each depot and widely across regions and across Europe. In some areas of Europe an average of 20% is common, while within the UK, it varies between approximately 10-17%, with higher repair demand concentrated in areas with relatively few automated distribution centres.

"Geography plays a part," says Jane. "You can tell where the less automated RDCs are. The South West has more forklift activity and less automation, while the opposite is true in the South East.

"We have to tweak our facilities to cope with greater requirements to repair.We watch it closely, as it is a sensitive indicator for us. It can cost an extra £2 per pallet to repair rather than sort. A 1% change in the damage rate can cost £60-70,000 a year.We must understand why it is happening, and manage it, and accept it, because there is nothing we can do about it." As well as keeping a close eye on the efficiency of its facilities, LPR works hard to maximise the efficiency of its transportation.

One example is making use of empty running on the trucks of its transport contractor Norbert Dentressangle. In the UK there is a pallet imbalance, with a lot of manufacturers in the north but the population concentrated in the South East.

"There two ways of doing it," says Jane. "We can either process pallets in the South East and do a long delivery back to the customer, which can be quite expensive because it is primary freight. On the other hand, Norbert has an imbalance, with empty running going back to the north, so we use that to take pallets north for processing. The advantage of a national contractor is we get visibility of empty flows and can tap into them." LPR has certainly hit on a winning formula, and Jane is confident it is one that will provide growth for many years to come. In its first year in the UK, LPR processed 350,000 pallets, this year it will process 7.5 million.

"We're proud of the organisation, it makes you pinch yourself," says Jane, reflecting on the fast pace of growth, which brings its own challenges.

"When a business grows very quickly, jobs specs can change dramatically. You regularly go through barriers, and we need to ensure people evolve with their evolving roles." LPR is predominately involved with ambient bulk goods and sees growth opportunities in the drinks sector, which represents 50% of the firm's business on the continent.

"There are operators, in this sector, which potentially will act as a subcontractor through Norbert Dentressangle where logistics synergies can be exploited to the benefit of all parties especially in terms of reduction in empty running. It is a good opportunity but it involves quite a lot of drays to pubs and clubs etc, which is more complicated and brutal with the pallet.We have good experience in Europe, we need to get it up and running in the UK."
MORE FROM THIS COMPANY