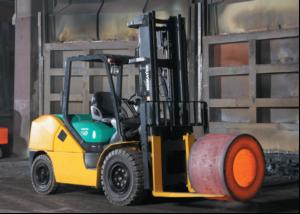 The demonstration forklifts are used across the county by Komatsu forklift dealers and the first forklift with weighing system has already been sold.

The Liftlog 100+ provides a time efficient means of check weighing alongside a load-totalising feature and overload monitoring functions. This is said to make it ideal for use where multiple pallets of a single product are to be check-weighed or where weight limits are to be adhered to, negating the need to travel to a floor-mounted platform scale.

A hydraulic load sensor measures the increase in system pressure and the Liftlog 100+ displays the weight to the operator.

Also included is an overload alarm that informs the operator of load status.

Ambassador Lift Trucks has seen increased interest in weighing applications on forklifts. Director, Trevor De'Ath, chose to demonstrate forklift weighing on his demo fleet as it would, "provide a new feature of forklift use and generate further awareness of the wider product offering from Komatsu."He continues: "The high level of support and service offered by RDS South East has given us increased confidence in the benefits that weighing systems can bring to our customers, helping both them and us achieve a significant reduction in total operational costs and facilitating superior work performance."
MORE FROM THIS COMPANY
Send Enquiry
View Company Profile
RELATED ARTICLES