Moment of glory for operators

I'm sure most of you are familiar with the ITV show The Cube, presented by Philip Schofield.Well, strip away the studio lights and camera tricks and add forklifts and you have something like The Operator of the Year competition. 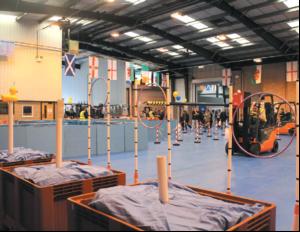 Run by the Road Transport Industry Training Board (RTITB), the competition puts operators through their paces with a range of devilishly conceived tasks designed to reward safe practice and high degrees of accuracy.

I was lucky enough to attend the event last month in Telford and can say the tension was palpable during the competition as professional pride, and a brand new car, were at stake. The concentration, precision and dedication of the operators was very impressive as they tackled tests such as Hook-a-duck, Smash 'em Alley, and Helter Skelter. But what kind of sadistic mind dreams up these tests? Simon Docherty, standards manager at RTITB and head judge admits a lot of people, mostly competitors but also guests, have said he is very sadistic.

"The tests are fun to do and watch, they are designed to be a spectacle. There is a finite amount of things that a lift truck can do, so its tricky to come up with new tests," he says.

"It's also important that we stretch the competitors and broaden their skills. For example, this year we incorporated four attachments (supplied by B&B Attachments) into the tests, and no operator will have operated them all before." The tests took a week to put together and although they are far removed from normal working life for the operators, the skills required to complete the tasks such as positioning forks at the right height, adjusting the tilt on the forks, and carrying a load safely are precisely the kind of skills they use and must master in everyday operations.

Competition winner Gary Maher (middle below) confirmed that the tests were much harder than the 2008 finals as he emotionally accepted his prize. He adds: "I hate to think what the next one will be like. I enjoyed it but the event is all about safety.

I'm not better than any of the other finalists who all competed to a very high standard." The operations director of event sponsor Toyota Material Handling UK, Tony Wallis was very impressed by the precision and dedication shown by the ten finalists. "Anything we do as manufacturers to enhance the safety of the products is immaterial if we don't have competent operators. That is why we greatly value this partnership with RTITB," he says.

"If companies want to cut costs, focusing on driver training is the most cost-effective way to achieve this. The impact of operators is a lot greater than many people realise." As well as prize giving, the Gala Dinner also featured a speech from Jane Willis, director of cross cutting interventions directorate, HSE, again emphasising the central importance of safety to the event.

"Figures have fallen in three years from 1,600 serious injuries in 2008 to 1,000 in the last reportable year, with deaths falling from 13 to 5. But we are not complacent.

"HSE is taking firm action against firms that let down their employees. There are heavy fines for companies whose employees die or are seriously injured as a result of negligence. For example, we have recently fined one company £100,000 for a death which was caused by an overloaded forklift." As well as promoting safety, the award is an excellent opportunity for operators to receive a little limelight, as Laura Nelson, operations director, RTITB explains: "The operators are usually stuck in a warehouse, no one sees them unless there is an accident or an incident so its nice for them to get some attention.

The turnout has been better than expected, we had 100 preregistered and more than that attended on the day. The tests are difficult and having support behind the guys is great."
MORE FROM THIS COMPANY