London Gateway, the new global shipping port and logistics centre project, is expected to open in the fourth quarter of 2013 with an initial capacity of 1.6 million TEU (twenty foot equivalent container units). 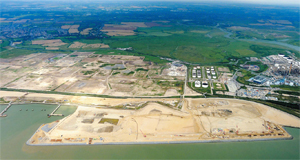 London Gateway, the new global shipping port and logistics centre project, is expected to open in the fourth quarter of 2013 with an initial capacity of 1.6 million TEU (twenty foot equivalent container units).

The London Gateway site (pictured, July, 2011) will be able to accommodate 18,000TEU vessels, which will be the largest on the seas in 2013 when Maersk brings the first fleet into operation. The London Gateway Logistics Park will provide 9.25m sq ft of space, primarily for distribution.

DP World will invest a further $1 billion in London Gateway over the next three years. The port is expected to become the premier UK logistics centre. Once complete, the new port and park facility is projected to save UK business millions of pounds every year in land transport costs. An estimated 65 million road freight miles every year will be saved as many goods will no longer need to be transported from deep sea ports to inland distribution centres. Instead, says DP World, goods will be sent straight into the new London Gateway Logistics Park and then directly to shops and homes.

Shipping Minister Mike Penning said: â€œThis is an excellent example of the type of investment we will be supporting through our Logistics Growth Review, where we are aiming to create the right conditions for private sector-led investment.â€

Simon Moore, chief executive of London Gateway added: â€œFrom Q4 2013 onwards, importers and exporters will be provided greater choice and opportunity to take costs out of their supply chains and reduce their environmental impact.â€

DP World also awarded four major port equipment contracts. ZPMC will provide eight quay cranes, which will be the largest in the world, able to handle the next generation container vessels of 18,000 TEU capacity.

Cargotec will provide automated stacking cranes and straddle carriers to be used in the port.