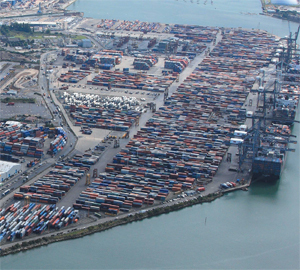 The 20,000 pallet distribution centre deals with inbound shipping, portcentric storage, order processing, pre-retail services, high volume pick and pack, booking in procedures and retail distribution. Import Services manages millions of cartons to retailers such as Argos, Tesco and John Lewis. Managing director John Eynon said: â€œAs the first UK port of call for container ships plying from the Far East to Northern Europe, Southampton represents a logical route for the import of goods into the UK. As such Import Services believes the Port-centric model is more efficient than the traditional regional and national distribution centres for retailers.We therefore wanted to demonstrate this through the production of an independent research paper from Southampton University.â€

Early findings from this research revealed 84% of retailers recognised the benefits of port solutions, with 25% of logistics suppliers either having port solutions or in the process of evaluating them. Mike Thomas, client services director, at Import Services explained further the efficiencies that could be gained.
â€œPortcentric is starting to take centre stage due to time, cost, and carbon.Moving products swiftly from containers and processing them direct to DC, store or to the consumer is faster. Moving containers a few hundred metres rather than across the country is less carbon intensive,â€ he said.

â€œRetailers face compression in order cycle times, they see order frequency increasing, while order volume is decreasing.We believe these factors make supply chain efficiency key and we feel the portcentric model is the most efficient.â€

The port-side warehouse is one of three operated by Import Services and its racking rises to 12 metres in a narrow aisle configuration. The company runs Flexi Narrow Aisle trucks for putaway and picking, complemented by Mitsubishi counterbalance trucks.

The firm has sited Newland conveyors in its Goods In and Goods Out sections, with Import Services opting for manual operations to give â€œmaximum flexibility as size of packages greatly variesâ€. It takes one hour to empty a container, palletise boxes and put them away, with each container typically housing 50 pallets' worth of goods. The warehouse uses intelligent lighting supplied by Lutterworth Ecolighting, which comes on only when aisles are in use, saving energy and money.

The Goods Out area presents its own particular challenges as retailers are very particular about how they want to receive goods and what information they require along with them. The retailers typically fine the logistics supplier for errors.

This often requires Import Services to open boxes and repack. For example, deliveries to Argos must have the range and product code on each item and this label should be visible when the larger box is opened. The firm uses Toyota BT man-up order pickers to pick items. The trucks are said by Import Services to be flexible, ergonomic, and with trailers in tow allow multi picking. The man-up operation has allowed Import to double its pick face and speed up operations. Import Services prepares 1,000 pallets per week for despatch and can double that for busy periods.
MORE FROM THIS COMPANY