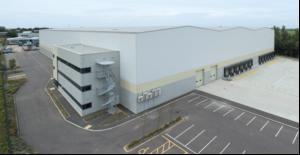 Third party logistics provider Century Logistics has enjoyed rapid growth since it established 14 years ago and this is down more to its willingness to provide value-added services than its traditional warehousing capabilities. The progress of the company is therefore a lesson to other similarly sized 3PLs and also to in-house operations looking to think outside the box to increase efficiency and add value.

MD and founder of Century Logistics Stephen Basey- Fisher is passionate about his customer-first philosophy and this comes across in virtually every aspect of the company's operations.

But perhaps the most eye-catching of its activities is the way Century has embraced eBay as a tool to help its manufacturer customers fill the black hole on the balance sheet that is end of line, returned and repaired stock.

"Manufacturers have got stock on the books they don't know what to do with," explains Stephen. "They tend to job it off for next to nothing.Why not sell stock on eBay were returns can be greater?"

Century started this five years ago, and it has grown to the extent that the eBay department now has a dedicated staff of six, including programmers, photographers and designers.

Selling stock on eBay yields Century's clients between 25 and 70% of standard retail price, nearly double than can be expected from selling as a job lot. Century's sales figures for July were over £90,000 from eBay sales, a 50% increase on June's figures.

"Our customers initially saw this as a way of clearing stock, now they see it as an income stream," adds Stephen.

Other benefits include giving manufacturers accountability.Manufacturers are keen to stop products going into the 'car boot' market and then turning up back at shops to be exchanged for credit. Century de-brands the items it sells so they cannot be returned to shops.

Century also feeds data back to manufacturers, so technology and product teams can better analyse the strengths and weaknesses of the portfolio. Century also tracks the reasons products are returned and can verify that stores are doing their job correctly.

"As we go forward, I see eBay sales as a big area of potential growth. Our customers are very happy with the information and product protection they are getting, as well as the revenue," explains Stephen.

Basing eBay operations at a logistics company makes sense, because the expertise and the access is there. The goods are sitting at the warehouse not being sold. The savvy manager can identify problems, create a test site, and see how items sell.

"We've got a high level of expertise," explains Stephen. "We have graduates in marketing, IT, and media and that is needed to create a site with a professional image.

"The eBay market is not a retail market, it is not how you sell on the High Street. It has a different mentality, and to sell thousands of items per week requires a lot of programming behind the scenes."

More than a box-shifter
Century is no mere box-shifter. Rather it has specialised in the harder to master, but perhaps ultimately more rewarding, business of providing value added services. The 3PL got a start through its contract with nursery product manufacturer Dorel, as Stephen explains.

"We were running UK distribution for Dorel and they started to have repair issues.We said we would look at it. Six years ago we employed our first engineer, and it grew. Now we have an engineering department of 20 staff carrying out 100 repairs a day.We take care of repair, spares ordering, and quality control. This where we really start adding value to the contract," he says.

The savvy warehouse manager is ideally placed to manage many value added services, due to proximity to the product, as well as product knowledge, and access to the manufacturer's customers.

"It made sense to look at customer services," adds Stephen. "We knew their customers, whilst the manufacturers are often based in cities where their costs were high, staff retention low, and their product knowledge was often limited. It made sense for us to take these tasks on because a lot of the core expertise is in the warehouse."

As well as eBay sales and repairs, Century specialises in rework and a number of other value added services. The company carries our a lot of rework on products that come into the UK market, correcting instructions, safety labels and even manufacturing and assembling goods that have been flatpacked in from abroad.

Stephen says the eastern European workforce in the area, with its high skills, good English, and flexibility are a great help with this kind of work.

Century also runs a customer service department, taking calls from end users on behalf of its customers. The department has 12 staff and handles around 300 calls per day. In all, the after-sales value added services comprise at least 25% of Century's business.

Stephen says a sign of the success of Century's value added services is a blurring of the lines between Century and its customers. For example, many Century staff carry dual cards with Dorel, and Century hosts European after-sales meetings for the manufacturer.

"It is a true partnership," says Stephen. "We're giving the customer reasons not to move away.Margin comes second, we want continuity and we want to help make the customer profitable.

"I take an an active interest in customers' sales and marketing as well. It's a two way conversation at the top level, and customers like that. And everything is on cost plus, we have an open book way of working."

Century has developed to the extent that it can offer the value added services on their own as well as in conjunction with traditional warehousing.With some customers, Century takes care of returns and repairs, but doesn't do warehousing.

"Looking to the future, I see an opportunity in electronic goods," says Stephen. "We won't do bulk into RDCs. I don't want Coca Cola.We want to go where we can add value."