The British Industrial Truck Association (BITA) and City of Bristol College have cemented their new strategic partnership with the official opening of the BITA Academy by Jack Lopresti MP. 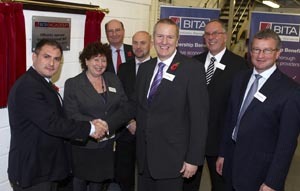 The British Industrial Truck Association (BITA) and City of Bristol College have cemented their new strategic partnership with the official opening of the BITA Academy by Jack Lopresti MP.

As a trade association, BITA is able to offer a pooling scheme for its graduate apprentices.Â This will enable free movement of newly trained engineers between participating companies giving apprentices the best possible chance of securing a job after completion of their courseâ€”even if their original sponsoring companies are restricted on headcount.â€

Forklift truck sales continue to rise in the UK, out-performing the economy as a whole. As a result, the forklift truck sector needs to attract high-quality apprentices to secure continued availability of qualified engineers in the sector.

At a time when the numbers of young people not in education or employment are rising, the BITA Academy offers young people not only high-quality training in essential maintenance and repair techniques - but also the skills required to pursue a real career all the way to management level.

Electric trucks make up approximately half of the modern UK industrial truck market which means that electrical engineering and diagnostic skills are required in the marketplace, in addition to the more traditional skill-set gained from an automotive focused course.

BITA Board Member, Bill Goodwin, the principal person behind the formation of the BITA Academy, said: â€œThanks to its 'pure FLT' course content addressing both internal combustion and electric power sources, BITA Academy graduates will be equipped in the best possible way to work with the full range of products on the market.

"As the Industrial Truck sector is actively seeking new blood, we are optimistic that the BITA Academy will deliver a win-win solution for young people seeking a rewarding career and BITA members seeking fully qualified lift truck engineers.â€

Course programme content is tailored specifically for BITA and its members, delivered by a structured training team using dedicated workshops and branded course materials. Candidates will be welcomed from all companies, and you don't have to be a BITA member to participate.

Jack Lopresti MP, said: â€œIt is a pleasure to see the coming together of Government policy initiatives, academia and industry in such an effective manner in my constituency. The BITA Academy promises to lead to quality training and real career prospects for young people in a sector which actively wants to attract significant numbers of apprentices to replace retiring employees. The time seems right for this initiative and I wish it well.â€
MORE FROM THIS COMPANY