Existing and potential UK customers from a variety of industries visited KNAPP's headquarters in Graz, Austria to see the group's latest technologies for warehouse automation KNAPP provided the Let's Move event for c 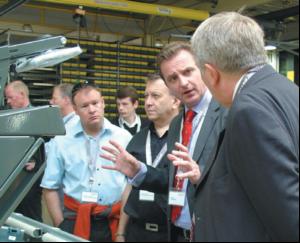 Existing and potential UK customers from a variety of industries visited KNAPP's headquarters in Graz, Austria to see the group's latest technologies for warehouse automation

KNAPP provided the Let's Move event for customers at its HQ in Graz, with highlights including a presentation on KNAPP's shuttle technology, a tour of the manufacturing facility and visit the distribution centre of KNAPP customer, JCL Logistics, and the warehouse of grocery retailer, SPAR Ã–sterreichische Warenhandels-AG.

JCL Logistics is a third-party logistics supplier with more than 60 sites across 25 countries. JCL provides distribution services for a number of clients including a major Swiss fashion retailer and recently invested over 18 million Euros in its Werndorf facility. The 45,000 sq m distribution centre, which opened this summer, accommodates some 2 million hanging garments, 15,000 containers and 10,000 pallets.

Designed to use automation to meet both B2B (retailer) and B2C (online consumer) demands in a flexible way, the site features KNAPP's OSR Shuttle solution, as well as the overhead conveyor systems of KNAPP subsidiary, DÃ¼rkopp FÃ¶rdertechnik.

The site also has the first installation of KNAPP's new Fastbox towers. Situated adjacent to the picking stations, Fastbox modules can act as a buffer for fastmoving products (such as goods featured in current promotional campaigns), as a buffer for order containers or as a means of sequencing containers ready for robotic palletisation or route-optimised vehicle loading. The Fastbox systems feature handling for containers, trays or cartons. The OSR Shuttle and Fastbox systems serve a series of order picking stations. As JCL wanted these workstations to be as ergonomic as possible, user-friendly materials - such as warm-to-touch wood and cushioned fascias - were incorporated into the design.

Craig Rollason, head of sales and marketing for KNAPP UK says: "With the time pressures that executives at this level face, we were delighted that so many of our current and prospective clients were able to join us for this visit and the feedback we have received clearly shows that they valued the opportunity to see our solutions in operation."
MORE FROM THIS COMPANY