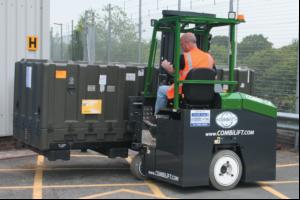 BAE Systems has recently taken delivery of a Combilift Combi- CB at its Samlesbury site. The ability of this counterbalance design 4- way model to handle pallets, containers as well as long loads has enabled BAE to significantly reduce the amount of trucks in its goods-in area for more streamlined, cost effective and safer handling procedures.

Samlesbury Aerodrome provides BAE Systems with manufacturing and support capabilities to major aircraft programmes including the Eurofighter Typhoon and the F35-Lightning II, the world's most advanced combat aircraft.Watertight logistics are crucial for the smooth running of the overall operation, and BAE has a long standing relationship with Carrylift Materials Handling, one of the largest forklift truck and materials handling companies in the UK. Carrylift supplies BAE Systems with a broad range of handling equipment across the 351 acre site and provides an on-site dedicated maintenance engineer to provide a personal and rapid response to service issues, minimising downtime.

Inventory manager Mick Woods wanted to rationalise the forklifts in his section, as the one sideloader and four counterbalance trucks were not being put to effective use, as he explains: "Each machine was only working for a very small percentage of the time, mainly handling one specific product. I was convinced that there were considerable advantages to be had if we could find one truck versatile enough to cope with the varied loads we transport around the facility." Due to BAE Systems' requirements for an all electric fleet, its stringent focus on safety and limited space to manoeuvre in certain areas,Mick knew that he was looking for a highly specialised vehicle.

After consultations with Shaun Kearns, Carrylift's national sales manager, and a visit to the IMHX trade fair last November he finally found the solution which ticked all the boxes: a 3t capacity AC battery powered Combi-CB. Shaun Kearns comments: "BAE Systems is very open to innovative solutions and we had spent some time on this project.When Combilift introduced electric versions to the CB range it became apparent that this was the answer." The CB's benefits have been considerable after just a few weeks of operation. The fleet has already been cut to three forklifts due to the truck's ability to operate indoors and out, to offload incoming deliveries and reload vehicles for dispatch and to work as a sideloader to manoeuvre 6m lengths of timber along a narrow corridor. As part of cost saving initiatives at BAE Systems a reduced fleet was a priority and Mick envisages further savings in due course.

"The up front investment in the Combilift will quickly achieve payback as we will be able to do away with more counterbalance trucks. Using just the one type of forklift significantly reduces outlay on maintenance and training and the CB's stability protects very valuable loads from damage.

"We have also freed up extra storage space that was previously needed to store the old trucks in what is a relatively tight area." Customised according to BAE Systems' specific requirements, the CB was fitted with 1200mm long forks to facilitate the handling of the packs of timber. As the weight of all loads needs to be stated for onward delivery, fork mounted weighing scales were also incorporated.

Mick has been particularly impressed with the hydraulic fork positioners, which have speeded up the handling of the different sized loads such as standard pallets and longer, more cumbersome CIC containers which hold aircraft canopies.

The drivers can operate this function from within the cab, avoiding the need to get on and off the truck to manually adjust the forks, which contributes to safer working practices.

In addition to the Combi-CB, Carrylift also provided BAE Systems with a complete operator training solution, provided on site at Samlesbury Aerodrome for convenience and tailored to meet the company's specific needs and safety standards.

Mick Woods comments: "Even with Combilift's flexibility to replace a number of fork trucks, there is absolutely no compromise in its performance, whatever mode it is working in.We have been so impressed with the improved operations that we are keen to demonstrate the advantages of this system to other BAE Systems facilities and sites."
MORE FROM THIS COMPANY