Chancellor George Osborne has deferred the 3p per litre fuel duty rise due in January until next August. 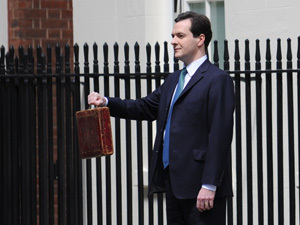 Chancellor George Osborne has deferred the 3p per litre fuel duty rise due in January until next August.

The move was announced in today's Autumn Statement.

The Government announced that the 3.02 pence per litre (ppl) fuel duty increase that was due to take effect on 1 January 2012 will be deferred to 1 August 2012.

The inflation increase that was planned for 1 August 2012, currently expected to be worth 1.92ppl, will be cancelled.

The Freight Transport Association (FTA) had warned the Chancellor in recent weeks that pressing ahead with the rise would increase a hard pressed logistics industry's annual bill by an extra £325 million.

This would have led to more redundancies, and more businesses pushed into financial difficulties, further damaging the economy, says the FTA.

Theo de Pencier, FTA's CEO, said: "We have avoided a horrendous New Year's hangover; January's rise would have cost the industry around £325 million.

"But while we are relieved that the Chancellor has steered us out of immediate danger, it is obvious that getting the UK back on the road to recovery requires a long term fuel duty strategy, and one which doesn't make tough times that much tougher for businesses in an already uncertain economy.â€

The price of diesel has risen by over 13ppl (13.9 per cent) in the last year, representing an additional cost to the road freight operating industry of £1.4bn.

de Pencier concluded: â€œToday's decision will help to keep the wheels of industry turning and shows that government has listened.

"However, the Chancellor has not been bold enough. He should have ruled out any rise in August 2012 as, if world oil prices remain high and above $100 per barrel into next year, it will still hit industry hard.â€
MORE FROM THIS COMPANY