The first mobile yardramp built by Thorworld Industries is going strong, more than 25 years after its original manufacture. 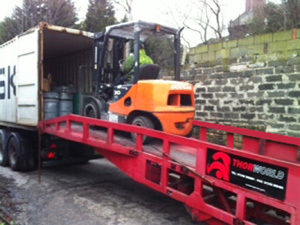 The first mobile yardramp built by Thorworld Industries is going strong, more than 25 years after its original manufacture.

Since 2009, Tivac Alloys has used the yardramp to plug a logistical loop in the business that was costing money and losing business.

Tivac Alloys' business depends on buying titanium alloy parts from all over the world, which it then melts and sends to steelworks for reprocessing.

With no unloading facility on site, Tivac booked incoming supply containers into local storage depots, where the alloys were unloaded into smaller vehicles for delivery to Tivac's premises. The company's director, Nicholas Morley, estimates that the total cost per container was in the region of £500.

â€œWe were turning down smaller jobs because it was not financially viable to take on the work,â€ Morley explains. â€œAfter researching the market, we decided to invest in a yardramp to enable us to unload on-site.â€

As Tivac was moving into new territory, Thorworld advised its requirements would best be met by trying a second-hand machine - and the company realised that it had a logistics veteran for the job.

'Ramp No.1,' as it is affectionately known by its manufacturer, was built in 1986. The yardramp delivered many years of continuous reliable service for Claymore Grass Machinery, before Claymore replaced it with an upgraded Thorworld model in 2005. Ramp No. 1 was then restored and put on display at Thorworld head office, until being called back into active service for Tivac
in 2009.

Since the Thorworld mobile yardramp was delivered, Tivac has vastly increased output and can now take on jobs that were hitherto restricted by cost implications. â€œThe yardramp guarantees more work because it is has become feasible to do much more than before,â€ confirms Nicholas Morley.

Ramp No.1 has been in constant use since its purchase. â€œ"It's an essential part of our operation, required as and when containers arrive, which is usually five days per week,"â€ says Morley.
MORE FROM THIS COMPANY