One of the most effective ways of attacking increasing costs in a cold store is to maximise storage density argues John Bower of European Conveyor Systems According to the British Frozen Foods Federation, the UK frozen 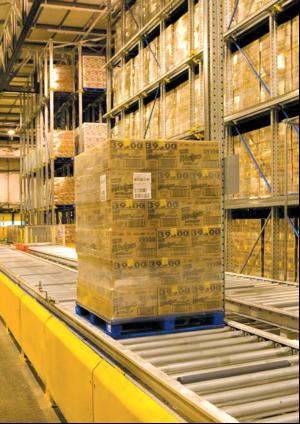 According to the British Frozen Foods Federation, the UK frozen food sector accounts for around £7.5 billion a year - a figure that is growing again after flat-lining in the depths of the current recession. That growth will require additional storage and transportcapacity.

This is a challenging prospect in view of the particularly demanding environment involved, and the continuing escalation of energy costs. In addition, in common with the rest of the logistics industry, cold store operators have to cope with the trend towards smaller order sizes, a greater product mix in each order and pressure to pick more quickly and more accurately.

One of the most effective ways of attacking increasing costs in a cold store is to maximise storage density. The smaller the volume of a building, the smaller the space to be cooled. In addition, a smaller footprint usually translates into a smaller roof, which is potentially one of the weakest areas of a building with regard to temperature control. So rather than expanding premises, it makes more sense to maximise the use of the existing space with higher and deeper racking, narrower aisles and reduced free-movement areas. This approach necessarily involves a fresh look at storage and retrieval systems and equipment. The latest design systems, for example, can considerably improve space usage and productivity, while modern warehouse systems and optimised process sequences can increase existing warehouse capacities and improve working conditions for staff.

Reduce the space Automated handling systems such as driver-less order-picking lift trucks, satellite storage systems accessed by compact shuttles, powered conveyors and robotic palletisers can considerably reduce the space needed for these tasks to be carried out and also reduce the number of people that have to work in such uncomfortable conditions. Also, personnel can spend only short periods of time working in these conditions, which has an impact on staffing levels and productivity.

A primary aim for cold store operators must be to minimise the amount of external air entering, partly because of the impact on refrigeration costs but also because of the condensation and icing problems that follow.Moving pallets in and out of a cold store on a conveyor rather than a lift truck, for example, greatly reduces the potential for external air to enter because the aperture can be so much smaller and particularly if this opening has an automatic sensor-activated door. Because of the limited amount of time staff can spend in the cold store, it is best to carry out sortation work in a warmer environment and operate a pick-to-belt system at the lowest temperatures.

However, moisture cannot be eliminated altogether, so electronic motors rather than pneumatic equipment should be used for stop and transfer mechanisms. For the same reason, electrically powered lifts are a good solution for moving goods between different levels, provided the appropriate cabling and locking mechanisms are used. ECS has installed many of these successfully.With goods lifts and other equipment where possible, it is advantageous to fit the control system outside the cold store, so that only the special cabling and electrical fittings designed for low temperatures are used inside. This arrangement not only reduces cost but also the amount of equipment within the store that will need to be maintained.

Here are some other factors to bear in mind: Battery selection has to take account of the fact that extreme cold can reduce cycle time by at least 25 per cent. Sensors and scanning devices may require internal heaters. Touch-screens and scanning devices have to be designed for use with gloved hands. Low-viscosity oil may be needed for motors and gears.