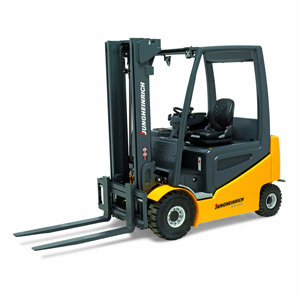 Jungheinrich have announced the launch of new additions to their ranges of ic-engine and electric-powered counterbalanced trucks.

Both the electric and engine trucks have been designed to offer the highest standards of energy efficiency, throughput performance and operator comfort.

VFG Series 5s
The ic-engine model - the VFG Series 5s - is available in both diesel and LP Gas options.

The trucks are powered by a Volkswagen engine and have a capacity of up to 5.00 tonnes.

Like other trucks in the Jungheinrich range of ic-engine counterbalance forklifts, the VFG Series 5s features hydrostatic drive technology.

Compared with the traditional 'torque converter' type of transmission system used in counterbalanced trucks, hydrostatic drive technology has fewer mechanical components and, as a result, requires less routine maintenance. The technology is also easy to work on.

The hydrostatic drive technology ensures low exhaust emissions. The Jungheinrich VFG Series 5s's emissions are the lowest in their class and well below the limit required by the new EU IIIB legislation that is due to come into effect from 2013 and will see the legal limit for exhaust soot particles reduced by 95 per cent.

When it comes to fuel efficiency, independent tests have demonstrated that hydrostatic trucks consume 2 litres of diesel or 2kg of gas less per hour than torque converter driven alternative.

The VFG Series 5s offers high levels of productivity. The engine speed automatically increases during the lifting process and all mast functions, truck acceleration and braking and changes of direction are smooth and precise.

To further enhance handling performance and to maximize energy saving, five different operating programmes allow the driver to set the truck's performance characteristics to match the load and the operating environment.

He adds: â€œNot only is the truck the cleanest in its class, the hydrostatic technology requires between 20 and 30 per cent less fuel compared to the market average. This means less environmental impact and higher productivity.â€

EFG 425-430
Jungheinrich's new electric counterbalanced truck - the EFG Series 4 - has a load capacity of up to 3.00 tonnes The new model is available with a choice of chassis lengths - including a short chassis version that reduces the truck's turning circle.

Like other electric-powered trucks in the Jungheinrich range of materials handling equipment, the EFG 425-430 models feature fourth generation AC technology.

The low energy costs are further reduced through energy reclamation during braking, so that a battery change in most applications over two shifts is no longer necessary.

When it comes to battery changing, a new device allows the battery to be removed easily, quickly and safely. The SnapFit adaptor is a mechanism fitted to a standard pallet truck that locks in to the underside of a 48 or 80 Volt battery effortlessly. The self guided SnapFit battery changing device reduces the time it takes to secure and remove a battery when it is due for recharging considerably.

For the truck operator, the new EFG Series 4 features a number of design ideas that allow the operator to adjust his working position to maximize comfort. The truck's slim steering column, intuitive seat and seat mounted armrest also improve the operator's sense of well being and therefore stay fatigue free over the course of a shift .

The cab itself is spacious with an open and uncluttered floor area and, when it comes to forward visibility, the EFG Series 4's mast is 50mm wider than the model it replaces while the truck's overhead safety guard offers a virtually completely unobstructed view.

A number of safety features have also been introduced to the new Series 4 as standard. For example, the trucks all feature Jungheinrich's Curve Control which automatically reduces the truck's drive speed as it enters a corner by monitoring the truck's speed, wheel position and steering angle.

At the heart of the Curve Control system is a continuously working sensing unit that monitors the truck's steering angle. Simply stated, the system quickly and effectively reduces the drive speed when an excessive steering angle is sensed.

Craig Johnson comments: â€œWhen a customer invests in a Jungheinrich truck they expect to get a top quality product. Our new Series 4 truck offers quality and performance from a truck designed to meet the requirements of clients operating in a broad range of industry sectors.â€
MORE FROM THIS COMPANY