Combilift makes an impact at Eurocell

Leading PVC-U building products supplier Eurocell has been using Combilift 4-way forklifts for over 20 years and has now expanded its contract hire fleet with Impact Handling. 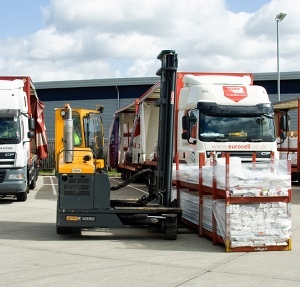 Leading PVC-U building products supplier Eurocell has been using Combilift 4-way forklifts for over 20 years and has now expanded its contract hire fleet with Impact Handling.

The UK's leading supplier of PVC-U building products, Eurocell has a network of more than 120 branches throughout the country and supplies more than 4,000 building plastics and related products within 24 hours from order to delivery.

The company therefore needs reliable and flexible materials handling vehicles that are able to cope with a variety of loads, in varying conditions, inside and outside, year-round.

Eurocell bought its first trucks directly from Combilift but moved to contract hire with Impact Handling through its Apollo acquisition. In 2003, area sales manager Tony Porter undertook a series of site surveys at six of the company's production and storage depots.

He proposed a fleet purchase and rehire scheme, which replaced all the older vehicles with new trucks over a three-year period. This was followed by site surveys at all the company's depots across the country, leading to Combilifts being specified for the network. The Combilift fleet now stands at 127 vehicles and it is a standard specification whenever a new company branch is opened.

â€œWe operate Combilifts in Eurocell depots throughout the UK and in Manufacturing & Distribution, all supplied and supported by Impact,â€ said Jeff Newton, Eurocell Logistics Manager. â€œThe C4000 models cover the majority of the fleet. We also use two 5 tonne capacity C5000s in distribution, for outside rough terrain work. The trucks are used for loading and unloading vehicles and movement of both finished and semi-finished stock around the respective sites and are, without doubt, the best tools for the job.â€
MORE FROM THIS COMPANY