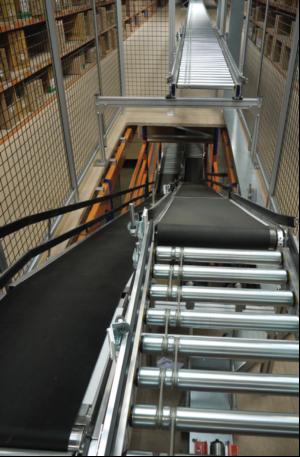 Over the last 20 years Boden has become one of the highestprofile clothing brands in the world, with Samantha Cameron, Michelle Obama and Angelina Jolie just a few of the many fans of its affordable high-quality fashion philosophy.

Boden's success and growth have been phenomenal. Starting with just eight products in 1991, sales grew to £50 million in 2002 and are projected to reach over £250 million this year. Womenswear accounts for the largest proportion of sales, along with substantial ranges for men, children, teenagers and babies.

To cope with growing demand in the UK and overseas, the company moved into a new global distribution centre in Leicester in 2003. By 2008, despite the opening of a warehouse to serve the USA, it was clear that further capacity was needed in the UK to cope with the continuing growth, which now involves 9.5 million garments a year being delivered to the Leicester distribution centre and, on average, 12,500 parcels a day being despatched to customers.

The additional storage capacity and throughput has been achieved through a £2.5 million investment programme. This involved acquiring an adjacent building with a floor area of 8000 sq m, linking it to the original premises with a two-way conveyor in a 90-metre-long covered bridge and installing new racking and conveyor systems designed to minimise walking time for staff and improve productivity.

In 2010 Boden, working with F M Nicholson (Materials Handling) Ltd as consultants, appointed European Conveyor Systems (ECS) to design and install the conveyor system serving both buildings. The system was required to carry a wide variety of cardboard cartons and plastic tote boxes up to a maximum weight of 20kg from the goods-in reception area to specified storage locations and onward to picking areas in both buildings, as determined by bar-codes on each item read by automatic scanners at transfer routing points. Throughput was specified by Boden at 480 boxes an hour over a 16-hour day, six days a week.

Boxes of in-coming merchandise are off-loaded from pallets at ten work-stations in the new building and identified with individual bar code labels that are scanned into a computerbased control system that specifies its destination in the warehouses. The boxes are then pushed on to the adjacent conveyor. Any that are mis-coded or need to be inspected are diverted automatically on to a separate spur to be dealt with, while the rest are conveyed to the bulk storage racking, which is on ground and mezzanine levels in the new building and on two levels in the old premises. The multiple levels have required a number of incline and decline sections, as well as luffing units that rise and lower automatically to link with the appropriate level.

One-hour fire resistance at the points where the bridge conveyor meets the two buildings has been achieved by installing steel shutters at each end linked to the firedetection and conveyor control systems.

This design activates the shutters automatically in the event of a fire and also prevents boxes blocking them open.

The main conveyor running from the goods-in area through the bridge to the original warehouse is reversible to allow cartons and boxes to be transported back to the start point at designated times.

To control the conveyor system, ECS installed a Devicenet network to communicate with remote control panels on three floors, including some existing equipment, which provided wiring options that reduced commissioning time on site. A Rockwell Automation control system was also used in order to provide flexibility in the final functionality agreed with the client. In addition, nominated staff have convenient access to information about the system in real time via the internet, using their desktop computers.

ECS started work on site following completion of the link bridge between the two buildings. In order to reduce costs, some existing conveyor equipment was refurbished and modified for use in the new system, and weekend working was required to avoid disrupting Boden's operations. Four months later the new warehouse went live, on time and within budget.
MORE FROM THIS COMPANY