There can be drawbacks when using a lift platform to serve single and double deck vehicles on the same bay, says Easilift. It has developed the Double-Dok to address these issues. Loading bay specialist Easilift Loadin 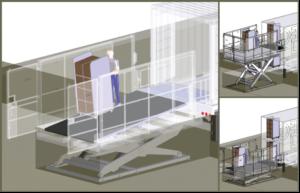 There can be drawbacks when using a lift platform to serve single and double deck vehicles on the same bay, says Easilift. It has developed the Double-Dok to address these issues.

Loading bay specialist Easilift Loading Systems has announced the UK launch of the Double-Dok, a blend of dock levelling and lifting platform technology that the company believes presents a flexible, cost-effective solution to changing usage patterns of the loading bay.

The launch of the Double-Dok counters calls within the industry for a change to the height of loading bays to service the growth in double deck trailer usage. Based on years of experience, Easilift believes that, in most cases, such an approach will almost inevitably deliver a solution lacking in operational flexibility and efficiency.

The Double-Dok provides the ultimate flexibility by combining the functionality of a dock leveller and a lifting platform. Its integral loading platform can be lifted up to 2995mm, easily catering for double deck trailers. Fully adjustable, the load platform is capable of a 7 degree incline or decline relative to the dock and can also be extended up to 1.25 m to become a versatile loading bridge, for smooth loading and unloading.

The unique arrangement of the Double-Dok has been devised following Easilift's research into the challenges caused by increased use of fixed bed double deck trailers. The company has installed over 300 double deck lifting platforms since 2002 in the UK. Nonetheless, Easilift acknowledges that, now double deck transport usage is spreading beyond conventional use between distribution centres, there can be drawbacks when using a lift platform to also serve single deck vehicles on the same bay - the problem which the Double-Dok has been developed to address.

"This brings undoubted benefits for the movement of goods by double deck transport; however, when unloading single deck trailers, operators are attempting to compensate for the height differential between vehicle bed and internal warehouse floor in ways that were unsafe, time-consuming and operationally inefficient.

"Changing the height of the bay won't solve this problem," Rob Fay points out. "Instead, the flexible gradient of the Double- Dok maintains a mutually supportive balance between dock, platform and vehicle to ensure a suitable working environment regardless of whether a single or double deck vehicle is being loaded or unloaded." Safety is paramount to the design of the Double-Dok. Another innovative feature is the Load Lok, a hydraulically operated locking support capable of supporting the load platform both vertically and horizontally, in order to eliminate movement created during dynamic loading. Further safety is assured with an integral safety guard attached to the horizontal bed, and an operator platform that remains level whatever the loading incline.

"Demand for lift levellers has always been low because double deck transport did not really exist until recently," confirms Rob Fay. "Today, space on the loading bay is at a premium, and the emergence of double deck transport requires functionality that the lift leveller's inventors could not have anticipated." Hence the new design of the Double-Dok, which gives warehouses and distribution centres the option to switch easily and rapidly between single- and double deck loading patterns.

Crucially, this has been achieved without forcing a wholesale change in loading bay dimensions, thereby avoiding expensive and disruptive building work. Rob Fay believes that manufacturers suggesting such changes are ignoring the realities of the market. "There are certainly circumstances when amending the height of a loading dock is the right move, and for Easilift this is not something new. We have been involved in a number of projects of this nature; however this approach is not right for everyone.

"The suggestion by some in our industry that reduced dock heights catering solely for double deck vehicles should be introduced as a matter of course suggests a lack of long-term planning." By avoiding structural changes to loading bays, warehouse owners can protect themselves against future problems.

Easilift points out that many warehouses are acquired on a freehold or leasehold basis, meaning that users must avoid tying future owners to unwanted loading bay configurations. "The type of amendments being called for by some within our industry are useful for a limited range of loading operations, which might deter future buyers who have no requirement for that size. The strategic deployment of the Double-Dok can avoid this situation in a more flexible and cost-effective manner."
MORE FROM THIS COMPANY