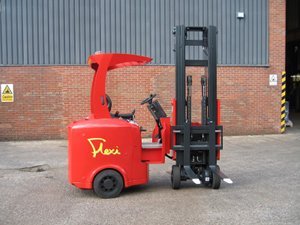 A four-wheel, electric-powered articulated truck, the Flexi VNA AC was first introduced to the UK market during the Autumn of 2010, and has enjoyed significant sales success since - thanks to its ability to work in aisles some 200mm narrower than comparative models.

The new version of the Flexi VNA has been adapted in a number of ways to meet the demands of the market in mainland Europe. For example, the new European model has a narrower chassis than the UK version, while electric motor and hydraulic noise has been reduced making the new Flexi VNA AC the quietest truck in its class.

To further enhance productivity and operator comfort, digitally controlled on-demand independent power steering has been introduce, while a low cost fork positioner is also available as an option.

But, like the original UK model, the new European version of the Flexi VNA is designed to offer the fastest, safest work cycles with optimum stability in aisles as narrow 1600mm wide.

At the heart of the truck is a compact front wheel drive axle design which, combined with the four-wheel Flexi VNA's ability to truly articulate through 220 degrees, allows easy and safe stacking and minimal manoeuvring in the aisleways. In fact, the Flexi VNA AC requires just one turn of the steering wheel to enter or de-stack a pallet - which results in significant productivity benefits.

John Maguire, sales and marketing director of Flexi Narrow Aisle, commented: â€œThe Flexi distributor network is well established in Europe: we have been successfully delivering articulated trucks to European customers for over a decade and our involvement in the European market over this time enables us to understand exactly what our European customers need from their trucks.

â€œThe last five years have seen tremendous growth in demand for Flexi articulated truck technology from European logistics service companies, retailers and manufacturing companies. We have recently fulfilled orders valued at over euro 300,000 for a French logistics services company and another for a leading German supplier to the automotive industry.

â€œDemand for our products remained high throughout the recession due, in part, to their proven ability to reduce logistics costs. But, as the core European countries begin to return to growth, we are seeing increasing interest from companies who want to store more goods for less cost - which is what Flexi trucks are all about.â€
MORE FROM THIS COMPANY