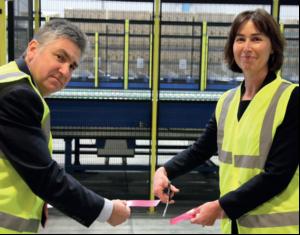 The ambitious project has seen a substantial extension to the building, as well as upgrades to the IT infrastructure, in total creating approximately 75 new jobs to operate the enlarged facility.

Bringing two of Unilever's product categories under one roof allows customers to order and receive crosscategory deliveries, bringing greater efficiencies for the customer and reducing carbon emissions by taking trucks off the road.

"We're delighted to be extending our partnership with Unilever," said DHL Supply Chain's CEO for Europe, Middle East and Africa, Graham Inglis. "Having operated the Cannock operation since 2005, we were always mindful of the site's potential to accommodate more capacity and it's exciting to see this come to fruition today. With the enlarged Cannock operation we are looking forward to deliver even greater levels of service for Unilever going forward."
MORE FROM THIS COMPANY