Allaero is one of the UK's leading aerospace parts suppliers. Historically most of Allaero's available floor space was taken up with traditional pallet racking, requiring wide aisles for fork truck access, and static she 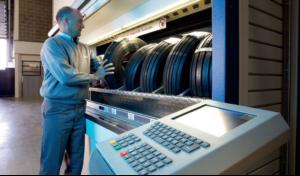 Allaero is one of the UK's leading aerospace parts suppliers. Historically most of Allaero's available floor space was taken up with traditional pallet racking, requiring wide aisles for fork truck access, and static shelving.

This conventional static shelving, although cost effective, had a number of problems. First the bottom and top shelves were virtually unusable due to health and safety issues regarding weight limitations for stooping and reaching. Secondly the pallet racking was considered an inefficient use of space considering the amount of vertical space in the warehouse. And with most of the available floor space taken up by racking they were faced with the option of either undertaking a costly re-location to a larger facility or seeking an alternative storage solution. Allaero did not want to move to another building, so they approached automated storage supplier Industore to explore the benefits they could expect from HÃ¤nel Lean-Lifts.

Allaero commissioned the installation of two Lean-Lifts. These two lifts increased Allaero's picking and replenishment efficiency, freed up valuable floor space by eliminating no longer required, floor space eating access aisles, and allowed additional stock to be stored within their current stores area. All these factors dramatically aided Allaero's operations and facilitated their continuing expansion without the need for huge financial outlay.

Justin Greasley, md of Allaero says: "We installed two machines - on time and within budget - and immediately released two stock rooms of free space. The benefits were obvious and we placed another order for a further two machines. With the commissioning of the second pair of Lean-Lifts we have been able to dispose of our original 2m racking and double our 10,500sq ft floor space."
MORE FROM THIS COMPANY
Send Enquiry
View Company Profile
RELATED ARTICLES