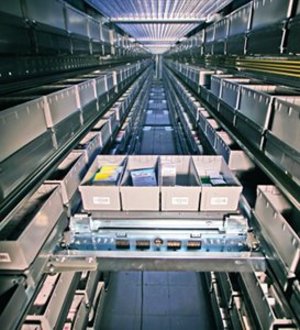 The automation vendor also achieved the highest order receipt in its history with a total of 425 million euros, an increase of 50% compared to the previous year.

Earnings before interest and taxes (EBIT) remained stable on last year's level of 11.3 million euros - indicating the bulk of extra revenue being channeled into investments.

KNAPP invested more than 20 million euros in research and development in the past fiscal year.

The company's workforce increased by 300 and now counts 2,100 members of staff, of which 1,600 are employed in Austria.

"Despite the uncertain economic situation, we were able to continue on our long-term course of growth," said KNAPP CEO Eduard WÃ¼nscher.

â€œDue to the on-going high level of investment in research and development - we assume that the number of employees will continue to rise in the next couple of years.

â€œMore than 350 individuals are working on new and further developments in our Styrian locations alone.â€

WÃ¼nscher added: "Looking at our track record of the past five years, we have a growth in turnover of approximately 130 million euros. That is more than 66%, and we are very proud.â€

Business in North America increased by 25% in the same period.

The core business areas of the warehouse logistics specialist are pharmaceutical wholesale, fashion as well as food/retail.
MORE FROM THIS COMPANY