Sainsbury's opts to refurbish forklift fleet rather than buy new

In a landmark move, Sainsbury's has refurbished the 140 forklift fleet at its St Albans distribution centre, rather than upgrading to a new fleet of trucks. The deal extends the life of the fleet for three years. 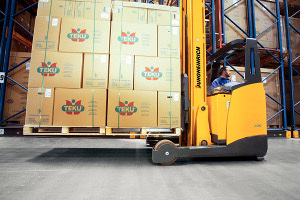 In a landmark move, Sainsbury's has refurbished the 140 forklift fleet at its St Albans distribution centre, rather than upgrading to a new fleet of trucks. The deal extends the life of the fleet for three years.

Jungheinrich originally supplied the trucks - a mix of low-level order pickers, reach and counterbalance models - as new products to Sainsbury's in 2005.

After six years of service at the St Albans facility, the fleet was due to be replaced.

Jungheinrich bought back Sainsbury's entire fleet and refurbished each truck - together with the batteries used to power them - and then contract hired the forklifts to Sainsbury's on a three year deal with parts and maintenance included.

â€œMy colleague Gary King and I both looked very closely at Jungheinrich's proposition and the kind of environmental and financial savings which the deal could bring to our business,â€ said Sainsbury's mobile plant equipment fleet manager, Derek Boghurst.

â€œWe concluded that it was an excellent opportunity that worked well for us on a number of levels,â€ he added.

The refurbishment process began in Autumn 2011 and was completed in phases over six months - which included the busy Christmas period.

At Dresden every machine was completely dismantled and all worn or defective parts replaced - including tyres and lift chains. The trucks were cleaned and repainted before being safety tested.

Jungheinrich's corporate accounts manager, Vernon Hill, explained: â€œThe advantage of carrying out this work within the group - rather than through third party dealers - is that we know all of the trucks that leave Dresden have been overhauled according to Jungheinrich's quality standards so that they meet all legal requirements as well as our customers' needs.â€

Neil Warren, Jungheinrich UK's used equipment and short term rental director, added: â€œWe have always contended that a good quality used truck that has been fully refurbished to the relevant European standards represents far better value than certain new models on the market. As I believe this deal demonstrates, Sainsbury's agrees with our view.â€
MORE FROM THIS COMPANY