A combination of manual and voice picking, coupled with shuttle-based automated storage, allows a manufacturer to makes its warehousing more efficient. 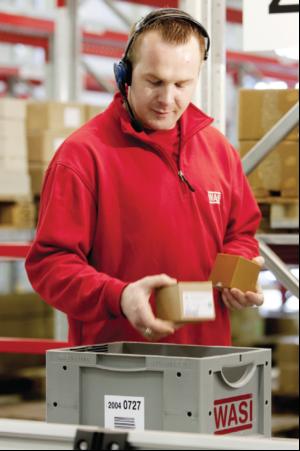 A combination of manual and voice picking, coupled with shuttle-based automated storage, allows a manufacturer to makes its warehousing more efficient

When leading metal fastener supplier, WASI, needed to expand its logistics operations, it asked KNAPP to provide an automated handling solution that would ensure delivery of the company's high customer service commitment.

WASI supplies a vast range of rust-free fasteners that are used in diverse industrial and consumer applications.

The company has a range of over 26,000 products includes screws, nuts, rings, washers, pins, rivets, rods and clamps.

Based in Wuppertal - between the German cities of Dusseldorf and Dortmund - the company employs over 250 people to serve some 6,000 customers in 60 countries. After opening a new logistics centre in 2009, double-digit growth in the company's turnover and a steady increase in the number of products supplied forced further expansion and the construction of a second logistics facility in Wuppertal. The highly automated handling solution at this new warehouse was handed over by KNAPP in 2011.

In many instances, WASI delivers orders directly to the customers of its clients, allowing the clients to hold less stock and thereby reduce their fixed capital. This business partnership model must be underpinned by efficient logistics operations.

The OSR Shuttle solution designed for WASI was the first ever to feature threedeep storage, although KNAPP now offers four-deep storage with its latest OSR Shuttle system, which can store containers and cartons of various dimensions without having to use additional trays. The system features a shuttle on every level of the store, all served by high-speed lifts at the front of the system. A conveyor system then transports the containers to the ergonomically designed workstations, which can process 540 containers per hour.

This simple and flexible system allows pickers to use both hands in order to pick a variety of products, including heavy items. WASI's new handling system also features a stacker crane system for pallet storage and retrieval and a conveyor system with dispatch lanes for sortation of completed orders.

The handling solution features KNAPP's KiSoft family of software products to allow WASI to integrate the OSR Shuttle technology and conveyor system with the high-bay store plus container and pallet picking areas. The solution allows WASI to meet the diverse needs of its customers, who may require anything from a small package up to a large volume of products on pallets.

WASI holds 15,000 tonnes of stock and achieves 10,000 picks per day in order to ship 200 tonnes of goods daily.
MORE FROM THIS COMPANY