Proteus Software explains how voice technology can help improve the bottom line in the warehouse by optimising the available picking time. 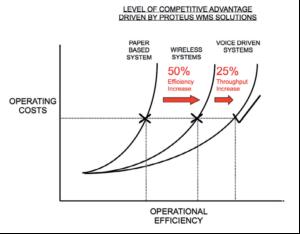 Technologies follow a well-trodden path to mainstream market acceptance. At first, they are announced as the next big thing and large brand names are usually early adopters, with the rest following as the technology becomes established with successive iterations.

Such is the path of voice technology. It was first introduced some 17 years ago by Wal-Mart and is now used in some way by nigh-on all major DCs operating fine picking processes where fast-throughput and low-error are the order of the day.

We estimate up to 55% of warehouse costs are swallowed up by the picking process, and also that 45% of the average picker's time is taken up by completing other tasks such as replenishment, crossdocking and packing.

There is now a new generation of voice advocates among forward thinking SMEs.

Bulky bar code scanner technology is being leapfrogged in favour of a much more streamlined, leaner and lighter picking process.

Yes, voice is best in fine picking environments where picking costs are greatest and where potential for error is high, and yes, it is not suitable for large expensive bulk goods. So it's not the be all and end all, as many organisations are best served by a variety of picking processes.

However, evidence from multiple sources is impressive. Numerous case studies show that in the right circumstances voice investment will achieve ROI in approximately 6-18 months, bring training time down to minutes not days, and improve efficiency by anything up to 75%. It also speaks multiple languages to accommodate foreign workers.

Moreover voice headsets are less likely to be dropped, run over by forklifts or suffer damage, unlike heavy RF scanners.

Headsets weigh a lot less and leave both hands free for work - why pay for the privilege of deliberately restricting personnel to the use of one arm and asking them to risk repetitive strain injury? The net outcome is not only savings but higher throughput, which translates into faster stock to cash conversion rates, increased stocking capacity, increased ranges and smaller warehouse space requirements, less error, speedier dispatch and happier (and therefore more) customers.

It's not the cost of the technology that really matters but the contribution to the growth of the business.

In five or so years when the business has achieved its planned growth strategy nobody will be counting the capital investment needed to get there.
MORE FROM THIS COMPANY
Send Enquiry
View Company Profile
RELATED ARTICLES