A chilled fruit wholesaler whose products line the shelves of a host of leading supermarkets is enjoying a bumper year following an investment in a 1,200sqm temporary building from Spaciotempo UK. 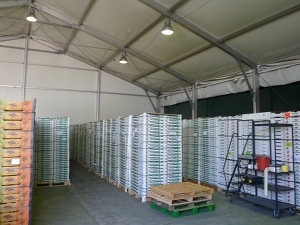 A chilled fruit wholesaler whose products line the shelves of a host of leading supermarkets is enjoying a bumper year following an investment in a 1,200sqm temporary building from Spaciotempo UK.

DCS Cold Storage, based in Ashford, Kent, and run by owner Tracy Samuels, supplies a range of fruits including grapes, pineapples, kiwi fruits and bananas to retailers in the South-East of England.

The company, which was founded eight years ago, was operating out of a permanent building but had outgrown the premises and, as a result, no longer had the capacity to take on more contracts.

Inevitably, this affected its growth plans and, late last year, Tracy decided to rent more land from her landlord. She then approached Spaciotempo, requesting a temporary building to be installed.

Within a few weeks DCS Cold Storage was able to move into its new facility. Consisting of two five metre-tall Neivalu structures, the building is laid out in an L-shape, with special portal beams fitted to the steel framework to create an unobstructed space. The structures were also fitted with steel clad sandwich wall panels and a thermo-inflated roof to support the chilled environment.

Since different fruit need to be stored at different temperatures - bananas need a warmer environment than kiwi fruits, for example - the buildings were fitted with PVC interior curtains separating off the different sections, locking cool air in - or out.

Tracy said: â€œI have been steadily building the business up but it had got to the stage where I was turning away business on a fairly regular basis because I had no more room.

â€œI couldn't afford for that to happen, so I took the plunge. I asked my landlord for more room on the site and placed an order for the temporary buildings.

â€œHaving that extra capacity has made a big difference and it has allowed me to sign a deal to supply the supermarket chain, Lidl.â€

Scott Jameson, director of sales at SpacioTempo, said: â€œWe are very pleased that Tracy has been able to capitalise on the growing demand for her products by investing in temporary storage.

â€œThe chilled food sector is one which is growing year on year and this is an excellent example of how a temporary building can be used to facilitate expansion in a fraction of the time and at a fraction of the price of a permanent structure.â€
MORE FROM THIS COMPANY