Dealing with the downturn

Andy Downton, md of Downton Transport, tells Simon Duddy how his company is showing ingenuity to work around the lack of new, high quality warehouses. 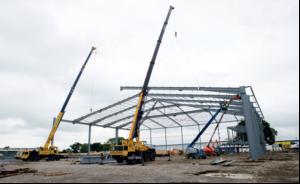 Andy Downton, md of Downton Transport, tells Simon Duddy how his company is showing ingenuity to work around the lack of new, high quality warehouses

It is in this challenging position that logistics specialist C M Downton finds itself. Andy Downton explains how his company is tackling this challenge head on. "We are increasingly having to take over existing buildings and refurbish them. For example, we could not find a suitable depot in the North West so we bought a plasterboard factory in Runcorn and converted it. It's not ideal, but in an age of austerity, we need to make do and mend," he says.

This project took a year to complete with Downton carrying out extensive works, including buying adjoining greenfield land, as well as excavating and re-concreting the site. Add to this the works to the building itself, such as refurbishing the warehouse roof and office blocks and it is clearly a major undertaking.

However, it brings some advantages. As referred to earlier, the depot is in the right place for the business. Compromising on this would arguably be more costly in the long term for a haulage business. Also, Downton has been able to build the site the way it likes, with a large yard, something which is not always available when buying new build property, where developers are often keen to maximise the storage potential of a site.

I asked Andy if he would go to the 'wrong site', if the space was not available in strategically important locations.

"Five years ago we probably would, but now with the price of fuel, we would not.

We've completed studies recently looking at a depot in Hemel Hempstead compared with cheaper opportunities in Milton Keynes. With the number of truck movements we are putting into London every day, it was going to add about £500,000 per year to our fuel bill. Quite frankly, the cost of fuel drives the location now more than ever. It has always been important, now its absolutely critical." Andy says the recession has changed attitudes to warehousing among both logistics companies and landlords.

"Companies will consider every possible building, and leases will be a lot shorter.

Landlords have to be more realistic. They have historically tried to keep rental rates steady. They used rent free periods to try to maintain their desired per sq ft rate.

"This means the market is in an artificial bubble, and this will affect rent reviews. For landlords, as long as the base rent is high, the multiple works better. But buyers are now more aggressive, and landlords are having to rethink. The thought process that property prices were only going to go north is gone." One example of this change is the attitude to long term leases. In the past many companies would have prized long leases as they gave security of tenure. They are now considered a major issue for companies when looking at acquisitions, as they can devalue a business.

If there is one overarching theme to Downton's approach to the fast-changing logistics world, it is flexibility, both in terms of how it secures the assets needed to meet customer needs and also how it serves customers.

When kitting out depots, Downton typically tends to mix up the layout with VNA, as well as wide aisle and bulk stack areas, certainly where business is not dependent on steady long term contracts with large clients.

"Flexibility is key to how we serve customers and maintain our strong relationship with them," says Andy. "We add value by putting IT systems in, and by carrying out end of the line packing, for example. It's all about what the client wants and having the agility to deliver. Of course, you must have a significant transport and storage operation to have a backbone to build services upon - but ultimately transport and warehousing are commodities. The peripherals and service levels are where the real added value is found."
MORE FROM THIS COMPANY
Send Enquiry
View Company Profile
RELATED ARTICLES