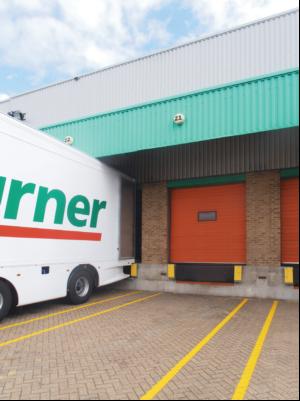 An installation of ten Stertil Stokvis hydraulic dock levellers and 20 dock bumpers has been completed at Davies Turner's Dartford Freight Terminal as part of a rolling programme that will see the replacement of 44 loading bays over the next few years.

Davies Turner is one of the UK's leading multimodal freight forwarding, logistics and supply chain management organisations with over 750 employees at 23 locations nationwide. The company has an annual turnover of £150 million and offers a collection and delivery service throughout the UK supported by a warehousing capacity of 100,000 sq metres. Davies Turner always invites competitive tenders from selected manufacturers and installers for all replacement and renewal contracts and Stertil Stokvis responded to such a request.

The ten hydraulic dock levellers include eight SP3020 swing lip levellers and two XP3020 telescopic levellers. Each model provides a load rating of 6000kg which is the total maximum load capacity, as defined by EN1398, that may be carried on a single axle.The ten sets of dock bumpers comprise the popular, highly durable Stertil Stokvis PE450 bumper that features a unique construction and patented materials to ensure superior performance and prevent damage to the loading bay and to vehicles during reversing, loading and unloading operations.

The ten new Stertil Stokvis dock levellers help to ensure the safe and smooth loading and unloading of up to 100 vehicles each day at Davies Turner's Dartford Freight Terminal.

These vehicles, carrying general cargo to and from almost every country in the world, include numerous different types and sizes of vans, trucks and trailers. It's not uncommon for these vehicles to be loaded to the fullest extent thereby leaving very little space for the positioning of a dock leveller lip inside the rear doors.

However, the design of the XP3020 model, incorporating precise control of its telescopic extending lip, means that the lip can be placed accurately onto the rear of the vehicle deck, so that vehicles can be fully loaded or unloaded by pallet truck, safely and swiftly.

Commenting on the recent installation of the Stertil Stokvis equipment, Mark Steed, Davies Turner's logistics and site manager, says: "We operate a very busy terminal here at Dartford with vehicles arriving from all over the world, so the safety and efficiency of our loading bays is essential.

"The new dock levellers and dock bumpers were specified as part of our rolling replacement programme which will see all our loading bays updated over the next three or four years. I'm particularly pleased to say that not only are the Stertil Stokvis products performing well but also the installation was completed very quickly and with no disruption to our operations."
MORE FROM THIS COMPANY