Airflow tells Simon Duddy how it seeks to make splitting pallets quick and easy, and that automating this process makes complying with relevant health and safety legislation a relatively simple matter. 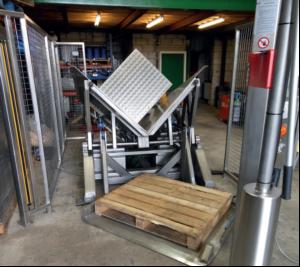 Airflow tells Simon Duddy how it seeks to make splitting pallets quick and easy, and that automating this process makes complying with relevant health and safety legislation a relatively simple matter

Safety in the warehouse has been, and is, undergoing something of a revolution. Companies are working hard to take manual lifting out of their processes as much as possible.

This is primarily to boost safety but also often improves efficiency as well.

Firms don't want employees to get hurt and miss days and certainly want to avoid costly claims. This is where manufacturers like Airflow come in. Led by Blackburn duo Stephen and Paul Wildgoose, the company insists that by taking the manual element out of the equation by automating the lifting, splitting, topping and changing of pallets, health and safety legislation becomes simple.

"Taking labour out of the process is the key thing," says Stephen. "It makes the process safer and can speed the job up by five times. The machine doesn't get tired, and doesn't need holidays or breaks. Shifts come and go and it continues." Unloading pallets for putaway in the warehouse can be problematic and labour intensive. It is not uncommon for racking bays to be 1.8m high, but some pallets that arrive in the Goods-In area are 2.4m high. This means layers have to be removed and restacked. The height of the top layers makes it difficult to do by hand with staff vulnerable to over-stretching and therefore to musculoskeletal disorders (MSDs). It's not unusual to have teams of a dozen workers carrying out this task in a busy warehouse.

Stephen explains there is an easier way to do it. "Pallets rising to 2.4m are too high for people to lift layers off, plus the machine does it within 30 seconds. It is so much faster and safer. Plus the customer can split the pallet at any point by lifting off as many layers as he likes." In addition to reducing manual handling, the Airflow equipment can be designed to a very high level of machine safety.

"Our equipment can go to Category 4 on safety, which many of our bigger customers require," says Stephen. This means the system has redundancy built in, there are multiple ways the machine can detect if a person is getting too close, such as light curtains, and if this happens, the machine shuts down."

While the machines make life easier for warehouse managers, they are by no means easy to produce, with much of the work taken on by Airflow bespoke to individual clients.

Airflow has produced a machine for an Austrian pet food manufacturer, which needed to change the pallet, inspect under the bottom layer of meat, remove a polythene slipsheet, all automatically and within one minute.

"For hygiene reasons, the equipment had to be made from stainless steel, which is much more difficult to work with than mild steel, it bends differently, it welds differently, but we achieved it. In total, it takes less than one minute to take the old pallet out, and put a new pallet in. I know I'm biased, but it's very good," explains Stephen.

In factories such as these, the aim is often to turn around 30/40 pallets an hour, so high speeds are essential.

Previously, the company carried out this task by using eight people lifting tonnes of meat every few minutes.

The equipment can also be used to aid space optimisation in the warehouse, as recent work for a major UK retailer illustrates.

Stephen continues: "The distribution centre deployed automated racking. At the Goods In area, product is deposited on to a conveyor system and routed automatically to its place in the racking.

"However, due to the storage configuration, there were pigeon holes that were too small for product. In one DC there were 1,800 such un-utilised spaces.

"Our Layer Lifter was placed in the Goods In area and that allowed them to split some pallets in half and fill these spaces. The payback is thousands of pounds per week." In the Goods In area forklifts load pallets on to the Layer Lifter, the driver pushes a button and the pallet is automatically split in half, or at any point.

The driver then lifts the two smaller loads and puts them on the conveyor, where they are barcoded and go through the system.

While the recession has had a strong negative impact on many manufacturers, the drive towards better safety practice, more efficient processes and better use of space has meant that Airflow has the best four years in its 30 year history.

Stephen concludes: "Manufacturers can be huge and use their scale or small and utilise niche expertise. We are a small company with an excellent product and a sound business. We're in control, we're lean and we are competitive - it's a good place to be."
MORE FROM THIS COMPANY
Send Enquiry
View Company Profile
RELATED ARTICLES