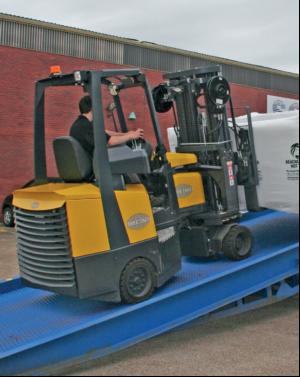 SCP UK has risen to the challenge of maintaining previous stock levels in a smaller warehouse footprint with the help of an Aisle- Master articulated forklift at its premises near Gatwick airport.

Following a strategic rationalisation, warehouse manager Joe Taylor had 26,700 sq ft at his disposal rather than 41,000 sq ft. "The limited manoeuvrability of our old reach truck would have meant having aisle widths of around 6m for some of our larger loads which are 8ft square," says Joe.

"By replacing it with the Aisle-Master we have squeezed the maximum volume into the space available to achieve an impressive total of 760 pallet spaces plus 120 bays for storing hot tubs." Deliveries arrive on site in rigid trailers or containers so any handling equipment needs to negotiate the fairly steep rear ramp for offloading and loading. The Aisle-Master's powerful AC drive motor easily copes with this, and access into the trailers is no problem due to the four stage mast with a low closed height, which can then extend to 5600mm to deposit pallets into the highest racking inside.

SCP had not used an articulated truck before but chose the Aisle-Master brand as Joe and his team were impressed by its robust build and testimony from existing customers as to its reliability. Swift payback on investment is anticipated when the lower operational costs of the smaller warehouse are factored in.
MORE FROM THIS COMPANY