WH Malcolm renews its fleet of Toyota lift trucks, with the company praising Toyota's reliability and contract flexibility After a series of trials with a number of material handling manufacturers, WH Malcolm renewe 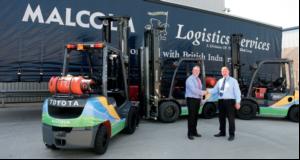 After a series of trials with a number of material handling manufacturers, WH Malcolm renewed its fleet of Toyota gas forklifts at its manufacturing site in Harlow, Essex.

With safety in the workplace being of paramount importance to WH Malcolm, the Toyota Tonero trucks are equipped with Toyota's Safety Plus Package.

This includes features such as a load weight indicator to help prevent overloading which may lead to accidents, a speed limiter to ensure the driver stays within the pre-set limit, and speed and acceleration control to limit the drive speed with load at height.

Freddy Solomon, head of warehousing & strategy at WH Malcolm says: "The reliability of the Toyota products and contract flexibility gave us the confidence to continue working with Toyota Material Handling UK." Stuart Reilly, national account manager for Toyota has worked closely with WH Malcolm on many projects over the past 10 years and adds: "It is a testament to the build quality and reliability of the Toyota product that provides the team at WH Malcolm with the confidence to continue working with us in such a demanding and challenging environment."
MORE FROM THIS COMPANY