Relocating a national distribution centre is a huge challenge, but Chesapeake moved its DC in 11 days with only 11 weeks to plan, in co-operation with materials handling supplier Atlet Chesapeake is a supplier of cart 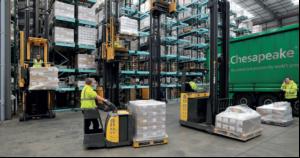 Relocating a national distribution centre is a huge challenge, but Chesapeake moved its DC in 11 days with only 11 weeks to plan, in co-operation with materials handling supplier Atlet

Chesapeake is a supplier of cartons, labels, leaflets, and specialist plastic packaging and its UK Pharmaceutical and Healthcare Packaging distribution centre services four manufacturing sites. Until April 2011 it operated out of a 72,000 square foot warehouse in Northampton.

Moving to a larger, previously unused warehouse in Swadlincote provided Chesapeake with an opportunity to extend and improve its distribution operation. Its logistics team saw the potential to increase its product volume and picking capacity by installing a denser configuration of racking in a narrow aisle design. However, the new operation necessitated changes to its fleet of trucks and its operational processes.

Paul Oakey, logistics manager UK and Ireland Chesapeake says they turned to Atlet for assistance. "The new set up in Swadlincote was a complete departure from our previous operation, so we were reliant on Atlet to advise us on how the operation would perform and what our new truck requirements would be." Atlet deployed its Logistics Analyser software to analyse and simulate potential warehouse solutions. Using data provided by Chesapeake, Atlet produced a simulation of the most effective materials handling solution based on its chosen racking design.

Alan Pitt, Atlet's account manager for Chesapeake explains: "The Logistics Analyser allows us to optimise a client's materials handling operation and deliver the most cost effective, efficient and flexible solution. In the case of Chesapeake, we were able to demonstrate how the operation would work most efficiently, which included making every location a pick location, and what trucks the new operation would require." The visual simulation also provided Chesapeake with the opportunity to identify potential challenges in their processes.

Atlet has been working with Chesapeake since 2009 when it was first contracted to supply a new fleet of trucks for its warehouse in Northampton. The flexibility provided within Atlet's five year contract enabled Chesapeake to exchange equipment at the time of the move without any penalty.

To help keep costs down, Atlet introduced refurbished equipment, reduced the first year rates, extended lease terms and provided clauses in contracts that enabled them to exchange equipment after a certain period.

Paul Oakey says: "We'd had our previous fleet for over seven years, which had kept costs very low for us, but we were not happy with the reliability of the equipment from that supplier. We turned to Atlet as they have a reputation for good performance, but this meant taking on a new fleet which represented a significant increase in costs. The option to take on Atlet's refurbished equipment and the fact they reduced the rate for the first year was extremely helpful to the business." Chesapeake prides itself on its reliable fulfilment and distribution processes and it was determined that the warehouse relocation exercise would be completed with minimum disruption to its customers. The team identified an 11 day window of opportunity to move which was provided by the consecutive Easter and royal wedding bank holidays in April 2011. However, this gave the project extremely tight timescales in terms of preparation and the physical move itself.

The new warehouse's revised truck fleet was to include the addition of three DCR trucks, which are built to bespoke requirements at Atlet's production plant in Sweden. The production timescales were extremely ambitious, but Atlet's team made sure that Chesapeake's critical deadline was met.

Moving warehouses requires planning, additional resources and additional equipment. To facilitate the move Atlet provided additional trucks on a short term hire basis. As part of its service it provided an experienced project manager to oversee Chesapeake's materials handling requirements and the logistics of the move.

As Paul Oakey comments, Atlet's project manager proved invaluable. "We had to move 18,000 pallets in 11 days, which involved 45 people with vehicles travelling a total of 42,000 miles. It was a logistical nightmare, but having Tony, Atlet's project manager on board, meant we had someone dedicated to ensuring that we had the right equipment in the right place and we could focus on our customers' requirements." The relocation was completed on time and with minimum disruption. At the time of writing, Chesapeake's new distribution centre has been operational for a year. The materials handling solution identified by Atlet provides Chesapeake with the capability to pick from every location, which has considerably improved operational efficiency. The introduction of pick and drop locations at the end of every aisle, serviced by Atlet's reach trucks and DCRs has removed blockages in the marshall area, eased congestion and reduced potential damage.

Paul Oakey concludes: "When we contracted Atlet we were looking for a significant improvement in support and performance. Atlet has certainly provided better performance and less downtime, and were instrumental in the success of our relocation project."
MORE FROM THIS COMPANY