Switch to articulated truck technology pays off for Laura Ashley 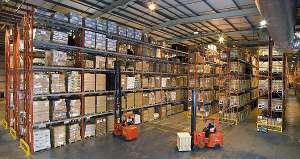 Before the arrival of the Flexis Laura Ashley had undertaken multi-level picking throughout the Newtown store using a fleet of guided man-aloft 'lateral stacker/order picker' trucks at multi level product picking locations.

However, following a major review of its storage and handling process, the company realised that by restricting picking to the first and second level of the storage system - with bulk goods stored within the upper levels of the racking and dropped to the picking faces as required, they could achieve a dramatic increase in order assembly efficiency.

By redesigning the layout of the warehouse to allow low level order picking from ground and first level locations, Laura Ashley was aware of the fact that, while it was essential to keep aisle widths to a minimum, the high degree of ground level order picking locations required at the site meant that they had to leave sufficient room for forklifts and order pickers to be able to work alongside each other efficiently and safely within the aisleways.

The original guided man-up lateral stacker trucks were considered a potential risk, as John Maguire, sales and marketing director of Flexi Narrow Aisle, explains: â€œIn its elevated position a Man-up VNA truck might lift the operator 10 metres in the air, but potentially if you have someone in the same aisle order picking at ground level there is always the risk of the Man Up truck operator not seeing the order picker or worker below. This was viewed by the project team to make the Man Aloft trucks far too risky for Laura Ashley.â€

Having evaluated the various materials handling equipment options open to them, the company chose a fleet of Flexi VNA AC articulated forklift trucks.

The unique four-wheel, electric-powered Flexi VNA AC is designed to offer faster, safer work cycles with optimum stability in aisles as narrow 1600mm wide. This made them ideally suited to the existing Laura Ashley aisle layout so no additional costs or disruption was incurred moving product or pallet racking.

The Flexi VNA AC can lift pallets to heights to over 10 metres, is supplied as standard with cushion rubber tyres for maximum traction in wet outdoor conditions, while twin front wheel drive means that the weight of the truck and the load is evenly divided between the front two tyres to further enhance traction and minimise tyre wear.

Effectively two trucks in one, the Flexi's design enables it to load like a counterbalanced machine - outside the aisles - but it can also work in very narrow aisles.

This dual purpose functionality guarantees the user a wide range of benefits - not the least of which is the ability to load and unload lorries, then deliver pallets directly from goods-in to the pallet racking in a single operation. By doing so, it increases efficiency and productivity while abolishing double handling and the costs associated with operating a bigger truck fleet than is necessary.

As well as providing greater operational flexibility, the switch to Flexi articulated truck technology ensured that Laura Ashley were able to get the most from their storage cube.
Clear aisle widths within the facility have been set at a width that allows low level order pickers to work at ground level in the same aisle as the Flexis safely and efficiently.

Since the move to Flexis, Laura Ashley report that picking is more accurate and order fulfillment levels have increased significantly as all bulk products in stock can be found and replenished to the pick face at ground level during the pick wave.

John Maguire adds: â€œRetailers want less inventory in store so the amount of break-bulk and ground level picking of single items is growing fast. At the same time ranges are growing and customers must pick from more SKUs so they need more low level locations to pick from for efficiency and at the same time save cost in increasing expensive warehouse space.â€

The change to very narrow aisle storage from conventional reach trucks can increase the number of efficient low level picking locations by up to 30%, with a corresponding increase in overall bulk storage capacity.
MORE FROM THIS COMPANY