The rising cost of transportation means that companies will increasingly utilise multimodal, portcentric supply chain models, according to speakers at the Warehousing Futures conference. 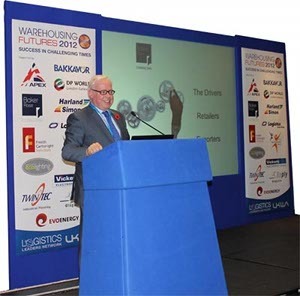 The rising cost of transportation means that companies will increasingly utilise multimodal, portcentric supply chain models, according to speakers at the Warehousing Futures conference.

Baker also pointed out that there was increasing political pressure to use more efficient transport operations, with the European Union recently stating that transportation over 300km should ideally not be carried out using road transportation.

He said that the portcentric model, where DCs are based close to the port rather than in a centralised location, in key markets made sense for a lot of companies as it often reduced the distance goods needed to travel by road.

For a truly efficient portcentric model, companies should use a number of distribution hubs feeding all the large population centres, rather than one centrally located hub.

He also said that companies should consider using hubs that offer multimodal transport options - such as costal shipping and rail transport - as they had in the past.

Companies that transport large or small volumes and those who co-locate in DCs should give serious consideration to using a portcentric operation that offers multimodal transport options, he added.

Baker said London Gateway (opening in Q4 2013) and Liverpool /Port Salford, were excellent examples of where this type of operation could be set up.

Also speaking at the event, Peter Ward, cargo supply chain commercial manager, London Gateway, added that the port also had an increasingly important role to play in the development of future supply chains.

He said ports had always been viewed as a cost adding node, but facilities offering multimodal, portcentric operations could actual become a value adding node.

He explained the port's role is changing and today is viewed as an important inventory management location in the end-to-end supply chain. He agreed with Baker that the landside transportation costs - particularly road transport - were now such a large part of overall supply chain costs that they need to be fully examined to identify whether there were any efficiencies that could be gained.

He said costs could be reduced through the elimination of unnecessary legs in the supply chain through the use of a portcentric solution.

This could work for a number of operations, including retail, aftersales, electronic and even operations where re-packaging is required before final distribution.

To design lasting supply chain operations, companies needed to consider inventory management, multimodal distribution operations and selecting hubs as close as possible to the end buyer, he concluded.
MORE FROM THIS COMPANY