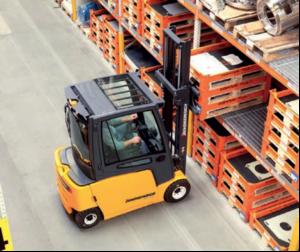 The truck is used to load and unload aircraft from transport vehicles, and to lift aircraft or structures on to specially designed support stations where AAIB's investigation staff can access them safely and effectively.

Given the awkward shape and weight of some of the loads that are transported around the AAIB site - parts are transported on metal pallets or lifted with slings - it was important that the truck offers a high degree of safety.

Jungheinrich's EFG series has been designed with the counterweight underneath the operator's seating position. By lowering the counterweight and positioning it further forward, Jungheinrich's engineers have effectively changed the truck's centre of gravity. The company says this makes the trucks inherently stable - without the need for additional electronic stability systems - which as many truck users have found to their cost, need regularly servicing.

The impressive stability of the EFG 316-320 is further enhanced by the truck's high mounted steer axle.

"All parts have to be carefully examined," says AAIB's engineering support manager, Sid Hawkins. "The aim of an investigation is to improve aviation safety by determining the causes of air accidents and serious incidents and making safety recommendations intended to prevent recurrence.

"This new truck plays an essential role in ensuring that we are able to carry out our investigations safely and efficiently," he adds.

The electric powered truck features fourth generation AC technology which, Jungheinrich says, offers a level of performance that is comparable to that achieved by an IC engine-powered truck.
MORE FROM THIS COMPANY