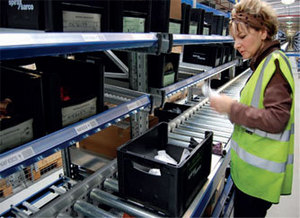 
Having already installed a carton live picking system for Spirax Sarco's Finished Goods Store at the beginning of 2010, BITO Storage Systems has implemented the next phase in the Cheltenham-based manufacturer's project to transform its order picking.

BITO's new storage and picking installation is a key part of Spirax Sarco's programme to refurbish its manufacturing facility in Runnings Road, Cheltenham. It receives components from the machine shop, which runs on a 24/7 operation, and feeds the production lines where they are assembled into the products that form Spirax Sarco's vast range. This covers the entire steam and condensate loop, from blow down valves and steam trap stations, to bespoke packaged systems and sustainable boiler houses. The completed products then go into the Finished Goods Store.

With this new system, eight staff pick 500 lines per day for delivery to the line side. This means Spirax Sarco is picking at least 20% more efficiently than it did previously and everyday that pick is between 99 to 100 percent right first time.

BITO's main challenge was to install a system with the capacity to accommodate Spirax Sarco's growth plans and provide a smooth flow through the plant yet fit into a space of 10 metres wide and 140m long. Combining its expertise and broad range of products, and with the help of a small extension to the building, BITO devised a solution that gives Spirax Sarco 9000 positions for a range of BITO carton sizes in this space.

The entire storage installation, which is split into four pick zones serving four production zones, comprises two 170m long aisles of BITO's standard, galvanised Pro Racking, six levels high. One of these aisles is a narrow aisle store, served by two wire-guided VNA (Very Narrow Aisle) trucks. This is the location for Euro pallets with collars or BITO's 800 x 600 XL plastic containers holding Spirax Sarco's bulkier items or large numbers of faster moving small parts. The pallets are stored with their short side at the pick face to allow three pallets to be located between the uprights.

The narrow aisle runs alongside a twotier carton live structure, which is integral to the rack. With its 650 square metre mezzanine this structure provides an aisle of carton live storage on two tiers to hold smaller items, weighing no more than 15kg, in BITO's 600 x 400mm and 400 x 300mm XL containers, with the smallest items held in BITO's RK plastic trays.

Standardising on BITO containers means Spirax Sarco's handling units are all completely compatible, allowing them to fit together neatly. The carton live flow lanes are two containers deep. Items are picked from the front container into a tote pushed along an integrated gravity roller conveyor. To accommodate further development, BITO's design incorporates space to install a powered conveyor in the future, which will allow goods to be sent automatically down the line.

Picked items from the mezzanine floor are transferred from the integrated picking conveyor to a transverse conveyor travelling to a Gebhardt lift serving that zone. The lift takes the picked goods down to the production floor for despatch to the lines.

BITO's solution gives Spirax Sarco a massive increase in storage capacity and in its ability to pick items. The manufacturer previously used stillages to store its parts, which were stacked 12 high. These cumbersome units, which each weighed 20kg, could only be removed no more than three at a time, so it required three forklift truck movements to access a stillage towards the bottom of a stack.

The old system would receive an entire lorry-load of machine-shopped components at once for booking in and put away. However, 'little and often' is the key to operating successful Kaizan, Kanban and JIT systems and this means keeping the flow going.

Now, loads are booked into a fixed picking location and the installation receives the goods via filtered, hourly deliveries. Parts travel from the machine shop by powered pallet truck on a 2 min journey every hour through a recently completed tunnel, which burrows 6 metres beneath a road to link the machine shop with the new storage facility.

Dave Chamberlain, logistics manager at Spirax Sarco, says: "Our new BITO racking enables us to maintain production rates and provides much greater visibility of our stock. Items are also easily accessible for order picking. We no longer need to move anything to access a required item. Previously, we had to move silos, stacks of stillages and carousels.

Furthermore, if we have a rush on picking we now have the potential to put in 20 pickers."