Supply chain challenges to cause switch to multi-location distribution networks

Companies will increasingly need to be more agile and flexible in designing their distribution networks. 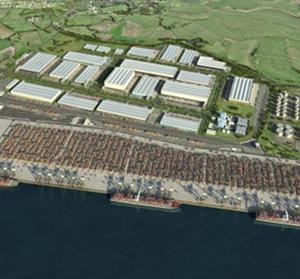 Peter Ward said: â€œIn the UK it may prove optimal for a major DC in the South to complement another operating in the Midlands.â€

Explaining the logic behind DP World's massive investment into London Gateway, the UK's new international hub port and Europe's largest logistics park, Peter Ward said this approach would be particularly relevant to companies whose key customer base is in London and the South East, the country's largest consumer market and population centre.

Peter added: â€œAgainst a background of escalating fuel costs, London Gateway will save millions of pounds of avoidable costs in UK supply chains.â€

Lisa said: â€œFrom a Midlands occupier perspective, the opening of DP World London Gateway next year is perfectly timed for a number of end users that are grappling with the challenges of the recession and are having to accommodate multiple channels to market.

â€œThe port centric logistics model [where DCs are located close to a port to reduce transport distances] at London Gateway will be compelling for many businesses as it adds capacity to the market that will enable end users to reconfigure their supply chain.â€

Cameron said: â€œThere is a shortage of good quality distribution capacity looming as a result of a recession related lack of speculative builds over the last two years.

â€œWe therefore welcome DP World London Gateway's commitment to offer a substantial common-user facility from which businesses can either benefit from incubator or shared space - whilst gaining flexibility in their supply chain - and if the business case is right for them to later move into their own facility.â€

Peter Ward concluded that the increasing size of containerships has caused supply chains to become longer and more costly.Â  He explained how new ports and terminals around the world have been developed further away from population and manufacturing centres because of the need for deeper water that can accommodate these larger vessels.

Peter said: â€œLondon Gateway is bucking this trend, bringing a new deep water port closer to exporters and importers, not just in London but also Birmingham and the Midlands.â€
MORE FROM THIS COMPANY
Send Enquiry
View Company Profile
RELATED ARTICLES