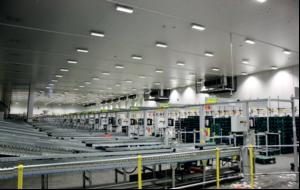 Gist operates a number of warehouses throughout the UK and Europe. The past two years has seen the company roll out a nationwide program, upgrading its existing lighting with Ecotronic T5 and LED intelligent systems. Proven energy consumption figures have shown savings to be around 70%.

The latest project at its Cumbernauld distribution centre has seen the installation of EcoSTAR 13200 lumen lobay units throughout. The 5 year system warranty, provided by Philips LumiLEDs was a major factor in the decision to award the contract.

An internal survey of energy use in Gist's warehouses showed that lighting was one of the highest consumers of electricity accounting for approximately 30% of consumption. Gist then engaged Ecotronic to survey the lighting in seven of its warehouses and requested a quote for the most energy efficient lighting solutions for each warehouse. The solutions varied depending on the height of the ceiling, the lighting levels required, whether there was any natural daylight, and whether the lights were in ambient or chilled warehouses.

"Our main reason for installing new lighting was to reduce electricity consumption. Secondary reasons were to improve lighting levels and quality of light. A lot of the lights were old, not working or had diffusers which were very dirty or had deteriorated so that hardly any light was being emitted from the lamp. The lamps supplied by Ecotronic have a lot longer life, therefore they do not have to be replaced as often, saving on our maintenance costs, says David Bingle, consultant manager at Gist.

Ecotronic was able to provide the solution that not only improved energy efficiency but also the working conditions for Gist employees. "The lighting has improved dramatically in some areas and we have had very positive feedback from all the sites. The light is now white, where previously it was yellow, so this makes it easier for the employees working in the warehouses to read labels or other documentation, which helps improve picking efficiency," says Bingle.

Of course a factor that is very important to any project is the predicted (and actual) payback period. "The payback period for replacing 400 watt SONs (sodium vapour lamps) is approximately one year which is very good. The payback for the other lower wattage lights is longer, however overall the payback is about two and a half years.

There are not many other energy saving solutions that offer this," says Bingle.

Often in warehousing situations lighting levels vary throughout any given 24 hour period. Some luminaires may be programmed to remain on constantly but at certain times they will automatically reduce lighting levels to maximise savings.

Gist's operations run 24 hours a day, 7 days a week so there was little expectation that savings could be made through the use of intelligent lighting.

"We were however pleased to find that there are times of the day when there are not people in areas of the warehouse so dimming actually did work. The lights are also fitted with daylight sensors so in areas where we have natural daylight the lights dim or turn off, saving even more electricity," adds Bingle.

"Ecotronic carried out trials for us on T5 & LED fixtures in a chilled environment to make sure the lights would operate correctly in chilled areas.

They produced lighting plans with light levels giving us the confidence that the proposed solutions would work," says Bingle. "Finally it was very important for us that Ecotronic's installation teams were professional and flexible as this allowed our operations to continue as normal during the installation."
MORE FROM THIS COMPANY
Send Enquiry
View Company Profile
RELATED ARTICLES