Cartwright has built four double deck longer semi trailers for Downton's Pets at Home contract allowing an extra eight pallets to be carried on each of the new trailers. 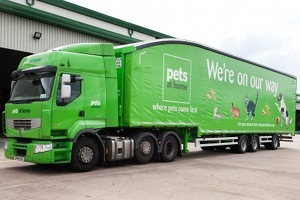 Cartwright has built four double deck longer semi trailers for Downton's Pets at Home contract allowing an extra eight pallets to be carried on each of the new trailers.

Historically, Pets at Home operates a double deck operation where it uses Moffett Mounty forklifts, which park at the rear of the vehicle enabling them to offload their vehicles at the store.

Cartwright has built the four new longer semi-trailers basically to the same design but without the Moffett Mounty on the back. Downton/Pets at Home are taking advantage of the extra length of the LSTs to carry more cargo and by dropping the weight of the Moffett Mounty off the back it allows them to carry an extra eight pallets.

The new trailers are being used for trunking from warehouse to warehouse.

Pets at Home operates a two Distribution Centre (DC) solution to service its store estate of 326 and growing retail outlets in the UK.

Although core product lines are dual stocked at both DC's, the Northern DC holds a large portion of the inventory which is distributed to all stores. These are predominantly the slower moving and smaller volumetric product lines that require specialist handling and storage.

The Southern DC also tends to deal with the majority of direct import products from the Far East and as a result there is a requirement to transfer pre-picked orders from North to South and direct import stock from South to North on a daily basis.

Steve Travis of Pets at Home explained: â€œThe introduction of these four longer length trailers has enabled Pets at Home to reduce the number of round trips between the sites from 20 to 14 per week and generated a significant saving on distribution costs.

â€œIn addition to providing the trailers, Cartwright, working closely with Downton management on site, provided driver training and familiarisation for the new trailers and to date they have proved to be a great success.â€
MORE FROM THIS COMPANY