Retailers geared for high throughput in the run-up to Christmas

TGW Logistics has provided some of Europe's largest musical instrument retailers with automated warehouse solutions that have the flexibility to accommodate higher throughout rates on the run up to Christmas. 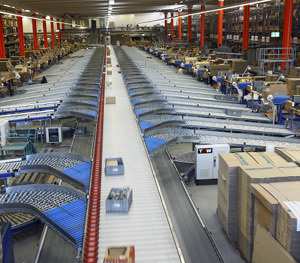 TGW Logistics has provided some of Europe's largest musical instrument retailers with automated warehouse solutions that have the flexibility to accommodate higher throughout rates on the run up to Christmas.

Musikhaus Thomann is a 59,201 sq ft music store in Treppendorf, Germany and is the world's biggest mail order business of musical instruments, with over four million regular online customers in Europe alone. Handling 12,000 packages a day, the retailer sought a system that would increase output by up to 50 per cent so it could accommodate the festive season and handle up to 20,000 packages a day.

Similarly, Music Store in Cologne has a substantial e-commerce operation that accounts for 70% of its annual turnover of 100 Million Euros. It too sought a system that could manage seasonal peaks and allow it to increase its extensive product range even further.

The Music Store opted to consolidate all its business areas under one roof including its main central warehouse and five peripheral warehouses. This centralised approach and the automated solution that TGW has installed has improved operational efficiency by reducing the number of touches on the goods. It has also guaranteed the immediate availability of products, increased the speed of shipping and reduced the error rate.

TGW's CI_LOG and CI_FLOW software controls the equipment and assures that all items arrive at a Natrix Sorter as fast as possible.

With both solutions designed to adapt to seasonal peaks and future growth, the retailers can be assured that their customers benefit from enhanced product availability and increased shipping speeds both now and in the long-term.
MORE FROM THIS COMPANY