Having recently been appointed to extend their sites for Abercrombie & Fitch (The Netherlands), SDI Group also received an order to install a third cross belt shipping sorter and the building of extra storage buffers. 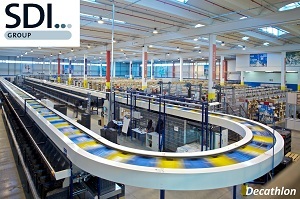 Having recently been appointed to extend their sites for Abercrombie & Fitch (The Netherlands), SDI Group also received an order to install a third cross belt shipping sorter and the building of extra storage buffers. In addition to this, SDI Group received an order to supply and install pallet racking for an offsite facility of Abercrombie & Fitch, together with converting the existing pallet racking within the main building from pallet to box storage.

Having just completed the 9th Decathlon installation in Marseille (France), SDI Group will begin installing the 10th Decathlon site in Mulhouse (France). This installation consists of an FSU (Flexible Sortation Unit) sorter, with 400 drops, 6 induction points and double trays. All of Decathlon's sorters have a standardised software package, significantly reducing the installation time.

SDI Group are also about to commence a project to install a conveyor system for Decathlon Getafe (Spain); this will be reinstalled, re-commissioned and extended at the same time.

Leading third party logistics operator No Limit (Poland) has awarded SDI Group a contract to install a PTU (Push Tray Unit) sorter at its multi-client distribution centre. The PTU will increase productivity by several hundred per cent compared to the existing manual process. With double chutes, 140 chutes on each side, No Limit will have a total of 280 active chutes available.

SDI Group have won a contract with Armand Thierry (France) for the complete hand-key equipment of their new DC. A job has also been won with Bulouva (USA), who's parent company already have a facility built by SDI Group. SDI Group USA have been working very hard to repair numerous systems damaged by the hurricane in the north east.