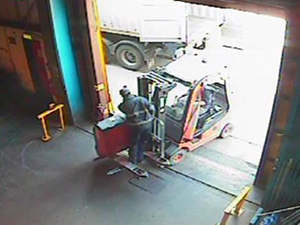 A bottling firm in Chorley has appeared in court after one of its employees was injured while being lifted on the prongs on a forklift truck.

The 39-year-old worker from Preston, who has asked not to be named, was filmed on CCTV standing on the forks of the vehicle as it lifted him and a battery-operated pallet truck across the warehouse floor at H&A Prestige Packing Company.

As the vehicle moved, the pallet truck overbalanced and fell from the forklift. The worker tried to hold on but also lost his balance and was caught between the forks on the pallet truck.

He avoided being burned by the battery acid that leaked onto the floor, but suffered bruising to his right hip and thigh.

H&A Prestige Packing was prosecuted by the Health and Safety Executive (HSE) today (30 November 2012) following the incident at its factory at Ackhurst Business Park on Ackhurst Road on 31 May last year.

South Ribble Magistrates' Court, in Leyland, was told the company had been hired to bottle an energy drink for export that is used during fasting. The pallets of bottles were heavier than usual, each weighing one-and-a-quarter tonnes, so a pallet truck was used to move them inside the containers.

On the day of the incident, the warehouse shift manager had stood on the prongs on the forklift on four separate occasions so that the pallet truck could be lifted in and out of the containers. When he finished his shift at lunchtime, he asked another worker to take over. It was this worker who fell from the forklift approximately 40 minutes later.

A HSE investigation found that several workers and managers had been seen standing on the prongs on forklift trucks on several occasions prior to the incident. However, the behaviour had remained unchallenged by two layers of management.

The company was fined £14,000 and ordered to pay prosecution costs of £6,657 for the offences, which relate to failing to ensure the safety of workers and failing to carry out a suitable and sufficient assessment of the risks.

Speaking after the hearing, HSE Inspector Tracy Read said: "The employee was lucky not to have been more seriously injured when he fell from the forklift truck. He could easily have been burned by the battery acid or run over by the vehicle.

"Rather than being a one-off incident, our investigation found that it had become commonplace for workers to stand on the prongs of moving forklift trucks.

"The company should have carried out a proper assessment of the risks workers faced and found a safer way of loading the pallets into the containers."
MORE FROM THIS COMPANY