2013 marks the sixth year of the everywoman in Transport and Logistics awards which seek to champion the women leading the way in logistics. 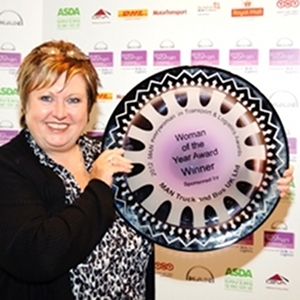 2013 marks the sixth year of the everywoman in Transport and Logistics awards which seek to champion the women leading the way, with categories encompassing those who are drivers, managers, or those identified as the stars of the future in this fast-paced and varied sector.

For 2013, the Freight Transport Association (FTA) is partnering with everywoman as titleÂ  sponsor of these awards.

Maxine Benson MBE, co-founder of everywoman, says: â€œThe transport and logistics sector is no longer an exclusively male environment, but we need to continue to raise awareness and get the message out about the diverse range of career opportunities it offers. We launched these Awards to raise the profile of inspirational female talent, to encourage women across the UK to pursue a career in the industry. We want to encourage more women to abandon their misconceptions and learn more about the diverse range of opportunities offered in transport and logistics. These Awards are a channel for unearthing role models, in order to readdress the gender imbalance in the sector and I urge women already leading the way to enter.â€

Theo de Pencier, chief executive of the Freight Transport Association added: â€œFTA is exceptionally proud to be the Title Partner of the 2013 everywoman in Transport and Logistics Awards. Women are an essential part of every aspect of supply chains, from drivers and warehouse staff, to transport managers and managing directors. Industry cannot be passive in attracting women, and the everywoman awards are the perfect opportunity to showcase how women can make a career in transport a successful and fulfilling one which is why FTA is delighted to support this event.Â FTA is leading by example through the high proportion of female specialists and managers it employs and women also hold key positions on its Main Operating Board.â€

This year's Awards categories are:
Rising Star of the Year Award  - This will be awarded to the woman aged under 30 who has excelled in her career, making a valuable contribution to her organisation. This award is open to all women working across the industry.

Driver of the Year Award - Sponsored by TNT , this will be awarded to the woman who is excelling in her role as a driver (this could include but is not limited to HGV, van or motorcycle and can include passenger transport).

Director of the Year Award - Sponsored by Asda Stores, this will be awarded to the female director who is excelling in her role. This award is open to female directors across all sectors and areas of the industry.

The Warehousing Award - Sponsored by DHL Supply Chain , this will be awarded to the woman that is excelling in her role within a warehousing environment.

Industry Champion Award  - This will be awarded to the woman who is an active champion for the industry, playing a vital role in attracting and retaining women in transport & logistics.

Innovation & Sustainability Award - Sponsored by DHL Supply Chain  and will be awarded to a woman who has already or is implementing an Innovative Operational Solution, including technologies and processesÂ that areÂ changing the industry in a positive way.

Team Leader of the Year Award  . Given to the woman who is leading a team to excel in a way that contributes greatly to the company's success.

The winners will be announced at a glittering awards Ceremony, held at the Savoy Hotel in London on 16 May 2013.

Nominations will close on 11 February 2013 and entries can be made online from 3 December 2012 at www.everywoman.com/tlawards.
MORE FROM THIS COMPANY