Opting for a combination of new and refurbished trucks from Jungheinrich, First Line saves money without sacrificing productivity or safety. 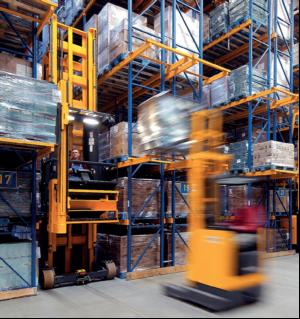 Opting for a combination of new and refurbished trucks from Jungheinrich, First Line saves money without sacrificing productivity or safety

First Line is an internationally renowned distributor of automotive components with almost 30 years' experience in the auto aftermarket. The company distributes a range of First Line and Borg & Beck branded parts to motor factors throughout the UK and, increasingly, to customers overseas.

Earlier this year, First Line consolidated its two warehouses on the outskirts of the Oxfordshire town of Bicester, into one purpose-built facility near to the original stores.

The new 130,000 sq ft unit offers sufficient space to cope with First Line's anticipated growth strategy. Over £9m of stock is held at the new DC in a mix of high bay pallet racking and small parts storage units.

Incoming loads arrive in containers which are de-stuffed using a fleet of Jungheinrich counterbalanced forklifts and powered pallet trucks. Individual pallet loads are booked in using the company's warehouse management system and put away initially within a racked consolidation area before being broken down and allocated a location within the bulk store or within the small parts picking section of the warehouse.

The high bay bulk store provides some 5,500 pallet locations. The storage cube is seven levels high and its 12 pick faces are divided by six aisles.

At its original two sites, First Line had operated a mixed fleet of rail-guided order picking trucks. During the planning stage of the move to its new site the company had initially planned to reconfigure the existing trucks to allow them to operate on a wire guided system.

"We found that rail guidance restricted access to the lower levels of the racking when we attempted to use pallet trucks in the aisles at our old sites and felt that switching to a wire guided system would offer greater flexibility," says First Line's Rob Currill.

Given the age of the existing trucks and the expense involved in making such a fundamental adjustment to the equipment's operating process, Jungheinrich proposed replacing the trucks with purpose-built wire guided machines and, to minimise costs, suggested using a combination of new and refurbished equipment.

First Line agreed. "We realised that it was a completely false economy to attempt to reconfigure our existing trucks, and took Jungheinrich's advice," explains Rob Currill.

The Jungheinrich EKX 410 electric powered Kombi truck can be used for stacking and retrieving pallets as well as for picking individual articles.

Capable of lifting loads weighing up to 1,000kg to heights of over nine metres, the trucks' 3-phase AC technology ensures the highest levels of efficiency.

Opting for a combination of new and refurbished EKX trucks brought obvious cost benefits â€" without sacrificing productivity or safety.

Used Jungheinrich trucks are refurbished to the highest standards.

Every machine is dismantled and all worn parts are replaced â€" including tyres and lift chains. The trucks are cleaned inside and out and repainted before being reassembled and safety tested.

"Because we refurbish our trucks to such a high standard, the operating costs of a used Jungheinrich truck will be similar to a new model," says Neil Warren, Jungheinrich UK's Used Equipment and Short Term Rental Director.

Whole warehouse solution As part of the consultation process on the project Jungheinrich were also able to offer some useful advice regarding the proposed use of racking at the new site.

First Line had initially planned to reuse much of the racking system from their original buildings within the new facility.

"Like any business, we strive to remain lean and had planned to recycle our racking," says Rob Currill.

He continues: "However, Jungheinrich's consultants were able to demonstrate that not only was our existing racking not fit for purpose, but that opting for a new system, would actually be less expensive than taking down, reconfiguring and erecting our old system within the new store.

"While some of the existing system has been reused on the goods-in consolidation area, we now have a purpose designed high bay storage cube produced from brand new racking." First Line had planned to move in over the Easter period, but with favourable weather conditions allowing construction of the new site to be completed sooner than expected, Jungheinrich were able to deliver and install the re-used racking for the consolidation area and the new highbay racking cube one month ahead of schedule. As a result of Jungheinrich's flexibility, First Line could start migrating stock from their existing stores to the new facility several weeks ahead of plan.

The finished design of the new store means that while orders for certain slow moving or bigger parts are picked and despatched directly from the bulk store, the majority of the products stored within it are transferred across the DC to replenish the shelves within the small parts storage area.

First Line's clients place orders either electronically (in 70 per cent of cases) using an EDI-based system or by telephone.

Orders placed before 6pm can be supplied next day anywhere in the country.

Once an order is complete it is triple checked before being boxed and delivered to the goods out area where it is loaded onto First Line's parcel delivery partner's waiting trailer.

"It's a very simple system," says Rob Currill. "But it works well. Our clients rely on us for next day delivery so an efficient storage and picking function is essential."
MORE FROM THIS COMPANY