A worker was crushed between two HGVs in a warehouse used for recycling, which led to a prosecution and fine for DS Smith Paper. 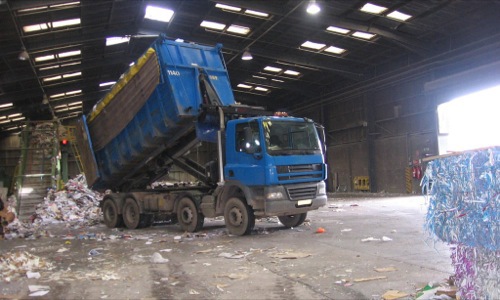 During a four-day trial at Manchester Crown Court last month, the jury heard the worker had, on 26 February 2010, emptied his load of paper and had got out his truck to close its rear doors, using two buttons on the side of the vehicle.

As he did this, another truck reversed into the warehouse through a separate doorway and trapped him between both vehicles.

The 61-year-old worker from Towyn, North Wales, who has asked not to be named, suffered fractured ribs, a fractured right collar bone, a punctured right lung and multiple bruising.

The court was told that, at the time of the incident, there were no barriers in the tipping shed to separate vehicles entering through different doors, and that a supervisor wasn’t present to indicate whether it was safe for drivers to enter the site.

A HSE investigation found it was common practice for two vehicles to be in the warehouse at any one time, putting drivers at risk when they had to leave their trucks.

DS Smith Paper also failed to enforce its own system for controlling entry into the tipping shed as there was not always a supervisor present.

"The court was told that, at the time of the incident, there were no barriers in the tipping shed to separate vehicles entering through different doors, and that a supervisor wasn’t present to indicate whether it was safe for drivers to enter the site."

It has since introduced new safety procedures, which mean only one HGV is allowed in the warehouse. A new safety area has also been introduced for pedestrians.

DS Smith Paper, of Turton Street, Bolton, was found guilty of breaching the Workplace (Health, Safety and Welfare) Regulations 1992 by failing to make sure the site was safe for vehicles and pedestrians. The company was fined £80,000 and ordered to pay £49,822 in prosecution costs.

Speaking after the hearing, HSE Inspector David Norton said: "A worker suffered serious injuries while working at the Severnside recycling site because DS Smith Paper Ltd failed to safely organise the vehicles in and around the tipping area.

"The risks caused by large vehicles reversing are well known, yet the company regularly allowed two vehicles into the warehouse at once, without any safety barriers in place.

"The driver suffered horrific injuries as a result of this negligence, and this case should serve as a lesson to other companies working with large vehicles to ensure that the correct safety procedures are in place."