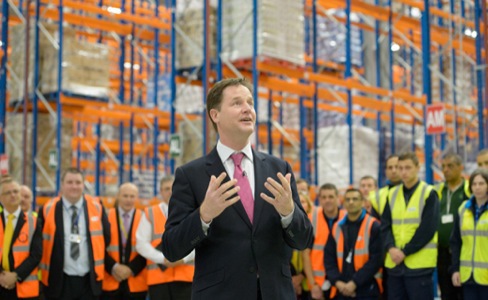 The 250,000 sq ft facility, which is operated in partnership with supply chain solutions specialist Wincanton, will support the growth of Sainsbury’s convenience store network in London and the South East.
When fully operational, the £30 million facility will support 200 convenience stores stretching from London to Brighton.
The opening of the new distribution centre has created 350 jobs, providing a real boost to the local community. When fully operational the facility will employ over 600 colleagues, making it one of the most significant employers in the local area. Earlier this year Sainsbury’s announced that it is accelerating the expansion of its convenience store business in London and the South East with plans to open 50 new stores by early 2014. This will create over 1,000 local jobs.
In line with Sainsbury’s 20x20 sustainability targets, all Thameside depot’s general waste - including paper, cardboard and plastic - is recycled or put to positive use, such as being turned into fuel. Other energy saving measures include LED light fittings in the chilled & frozen chambers, rainwater harvesting on the roof plus car charging points in the colleague car park.
Nick Clegg, Deputy Prime Minister, said: "I’m delighted to open the new Sainsbury’s depot and welcome the boost these jobs bring to the local community. It’s a long-term commitment from Sainsbury’s and Wincanton and is a sign of their ambitions for growth. As well as the hundreds of jobs this depot creates, it supports the expansion of Sainsbury’s across the rest of the capital, and the South East – securing greater opportunities for people across the area."
John Rogers, Sainsbury’s Chief Financial Officer, said: "Thameside is our second dedicated convenience depot and this state of the art facility gives us superb support for our exciting plans to grow our convenience business. This growth is good news for communities across London and the South East as we know that a new Sainsbury’s Local not only brings jobs but also increased footfall to an area, something that benefits nearby retailers on our high streets.
"Customers tell us that they like to shop little and often to save money and reduce food waste. Our convenience store business is meeting these trends and the team here at Thameside are perfectly placed to support the growth of our stores."
Eric Born, Wincanton’s Chief Executive, said: "We are delighted to be extending our long-term partnership with Sainsbury’s and play our part in supporting the expansion of its convenience store business in London and the South East.
"With the launch of this new distribution centre, Wincanton is responsible for managing the logistics operation for the majority of Sainsbury’s Local stores across London and we look forward to delivering excellent customer service as usual with the help of our colleagues here at Thameside."
Sainsbury’s Locals now account for nearly a third of the UK’s convenience market growth, with sales of over £1.5 billion and year-on-year growth of over 17%. The company is planning to open about two convenience stores every week and has over 540 convenience stores nationwide. Over five million customers shop in Sainsbury’s Locals each week, and in September, Sainsbury’s was named Convenience Retailer of The Year for the third year running at the Retail Industry Awards.
Sainsbury’s opened its first convenience store in Hammersmith in 1998. Last year Sainsbury’s announced that the continued growth of its convenience stores across the UK would create 10,000 jobs over the next three years.
MORE FROM THIS COMPANY