For JD Williams, the leading UK fashion and home goods retailer, warehouse automation is mission-critical and must remain as versatile, efficient and trouble-free as possible. To ensure goods are located and picked reliably, SICK UK has trialled vision camera technology which will be integrated into warehouse systems to achieve increased reliability and precision. 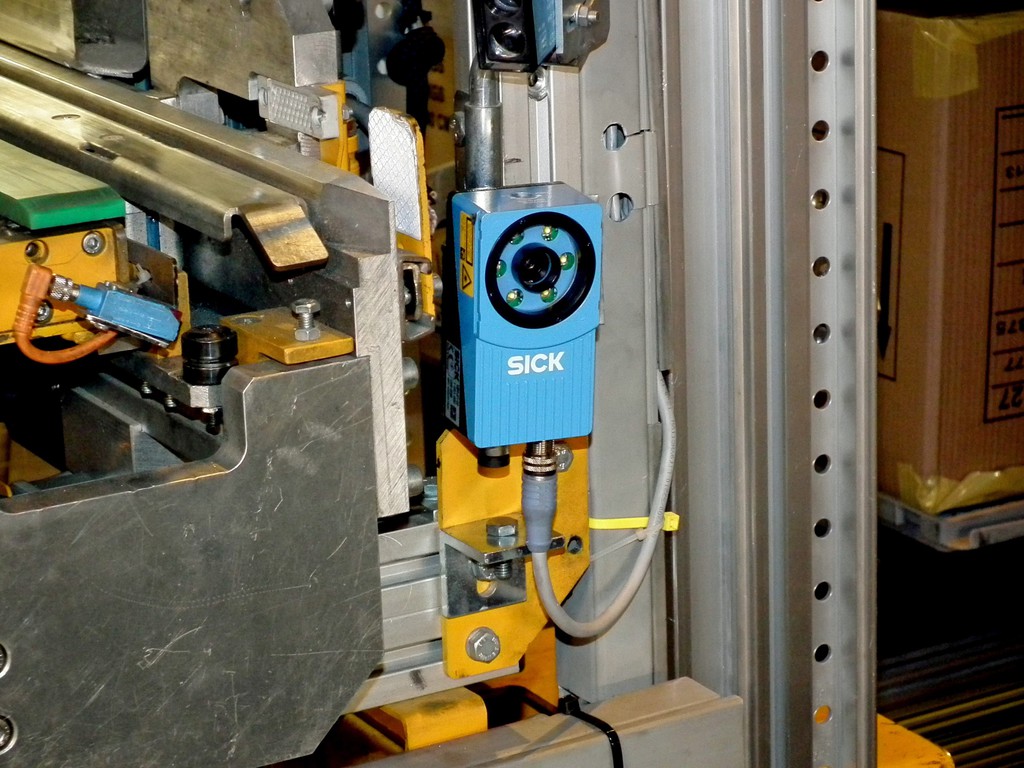 The automated warehouse at JD Williams’ distribution centre at Shaw, near Oldham is the primary Manchester Hub and was purpose built in 1998. It contains self-standing racking for some 400,000 usable storage locations, so having a totally consistent and reliable mechanism for finding goods is crucial to effective operation.

"We have developed the pick and place system as our needs have grown over the past 14 years,” explains Ron Rutter, electrical engineering technical manager for the Shaw facility. "We know it inside out and what it is capable of achieving. So we were able to work closely with vision specialists from SICK to develop a solution that provided a means of upgrading our current systems and improving operating performance.

"Following successful trials of the SICK Inspector P30 vision camera on one of the hi-bay aisles, we have been greatly encouraged by the results achieved and will be replacing the existing laser-based recognition systems as they need to be upgraded.” 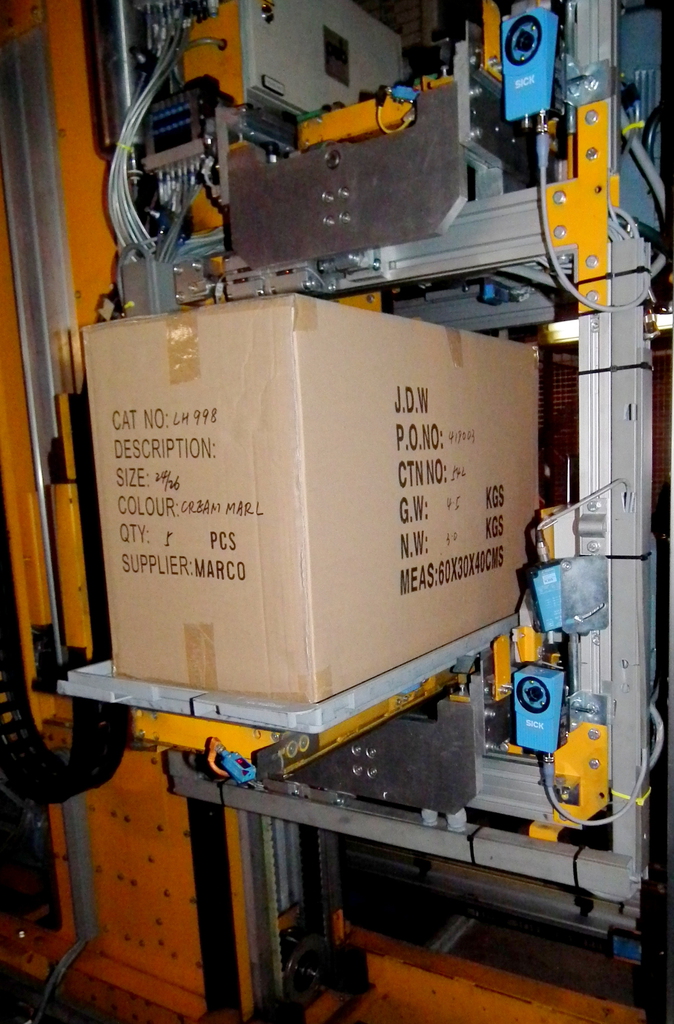 Although it initially required a higher investment than other options, the SICK Inspector P30 has proved its value in speed, reliability and availability. It enables the automated crane system to pick and place more quickly, saving typically 10 seconds per pick (potentially 15% extra picking cycles per hour).

The solution has also reduced maintenance costs and decreased the amount of downtime necessary The SICK system is very simple to set up and reprogram after maintenance downtime, or when adjustments to the racking have been required.

Key to the effective operation of the whole hi-bay storage is that the unique position of every tray and barcode identified carton is recorded on the Warehouse Management System and on the PLC which operates the system on each aisle, as well as being backed up by the central server. 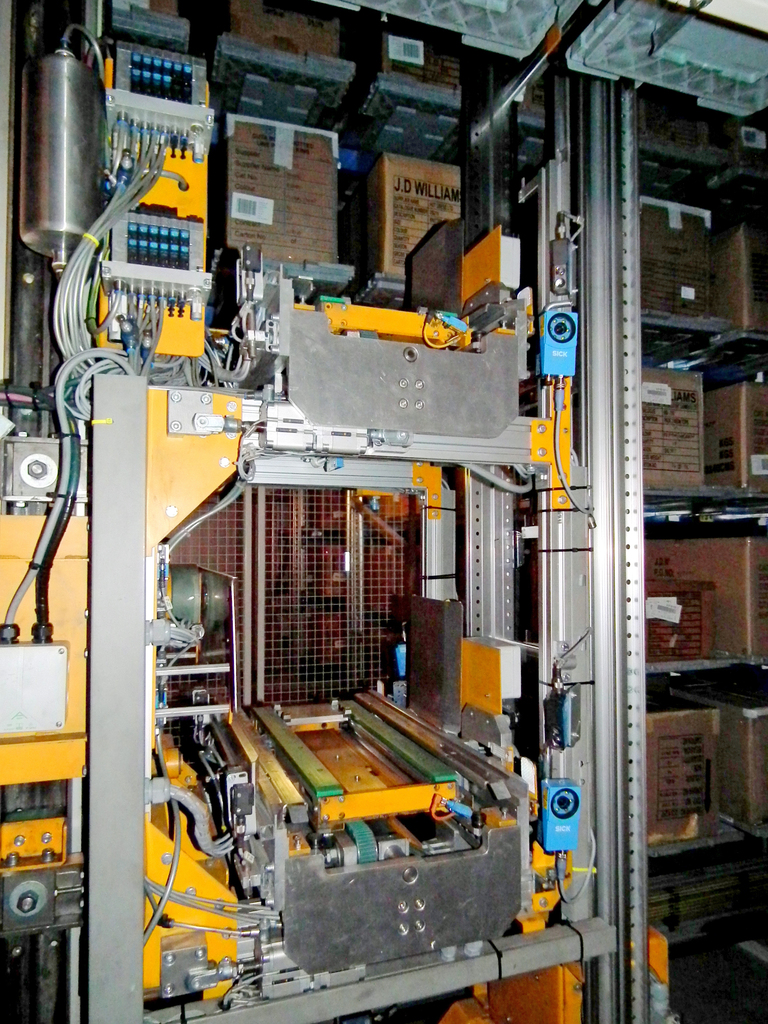 Fed positioning data by the PLC, the crane must align itself at high speed to within 2mm in two dimensions. If this accuracy is not achieved, the engaging lugs could miss the trays or even run the danger of tipping the tray and spilling the goods.

The self-standing racking is not an entirely rigid target and is subject to flexibility of movement, expansion and other stresses. So the system must be able to adjust itself to the target with both macro and micro movements.

A laser sensing system has been in operation at the warehouse for around 14 years and every rack opening has a white, L-shaped metal marker that contrasts with the dark blue background so that the lasers can use the markers to detect the position of the crane in a vertical and horizontal alignment. Each of the four lasers and sensors has to be fully functional to achieve the required positioning, so a fault in one prevents the operation of the whole crane.

The laser set-up also requires a certain amount of optical filtering and masking to ensure that the sensors are not picking up stray reflections.  As the laser system has got older, replacement models are more powerful and sensors more sensitive so that the optical filtering to achieve the same level of accurate positioning is practically impossible.

The SICK P30 uses a bright white light to illuminate the target with optimum contrast and colour value recognition. The on-unit LED display and control functions allow on-location set up, as well as the remote monitoring, display and diagnostics of function on the PLC controller.

Ron Rutter adds: "We discussed very carefully with SICK how the P30P30 could be adapted to provide a solution for us. The SICK engineers came to assess the system and trial the SICK P30P30s, and took on board our comments and suggestions for improvements.

"The effort we have put in to get it right has proved highly satisfactory on the aisle where it has been installed, with only one outage in the eight months since the installation, and so will be extended to other aisles as required.”

The crane is able to move to final position more rapidly with less final micro adjustments because the SICK P30 is able to recognise the white metal marker from about 40 cm away and guide the automated crane directly to the right position.

The lower amount of movement and more idle time also means there is far less wear and tear on the mechanical mechanisms, requiring less maintenance and less adjustment or re-alignment, so operating costs have been satisfactorily low.

Cabling requirements are also reduced. One cable per SICK P30 is required as opposed to four with the old laser/sensor set up. This improves reliability through reducing the potential for cable damage and plug/socket defects.

"SICK proposed using the SICK Inspector P30 vision camera. It has the advantage of its own LED illumination and can easily be programmed to use the original white markers on the racking for height and horizontal positioning,” explains David Hannaby SICK UK’s Product Manager for Imaging & Measurement.

"Through the easy-to-use SOPAS programming tool, the Inspector P30 'learns' the exact shape and position of the marker on the racking. As the crane moves into the position indicated by the punched-in co-ordinates, the shape the camera sees on the racking is compared to the recorded shape and enables the final micro-adjustments to be made prior to picking or placing the tray.”

As a result of their experiences with the SICK P30, JD Williams aims to replace the older laser systems with SICK vision cameras when they can no longer be operated. By offering a simple integrated illumination and sensing solution while achieving the accuracy and reliability required for JD Williams online retail business, SICK and the Inspector P30 have met the customer’s needs with precision.

Why precision is so important

In the high bay storage facility, the 80m-high racking is accessed by automatically-operated and centrally-controlled cranes which run along each of 32 aisles. Each crane runs horizontally on a central rail along a 60-metre aisle at up to 3.5m/s and reaches vertically on a chain drive from one metre from the floor to roof height.

The goods, packed in cardboard cartons (up to approximately 30cm wide, 40cm high and 62cm deep) are stored on heavy plastic trays. The trays are arranged in twos in each opening and picked and placed by the crane on either side of the aisle.

The automated crane’s picking mechanism uses lugs on the crane’s extendable arms to engage with four slots on the bottom of the tray to withdraw it or deposit it back on the racking.