Groupe Beaumanoir is a major player in France’s important clothing industry with six successful ready-to-wear labels sold in over 2300 stores in 40 countries in Europe, the Middle East and Asia. 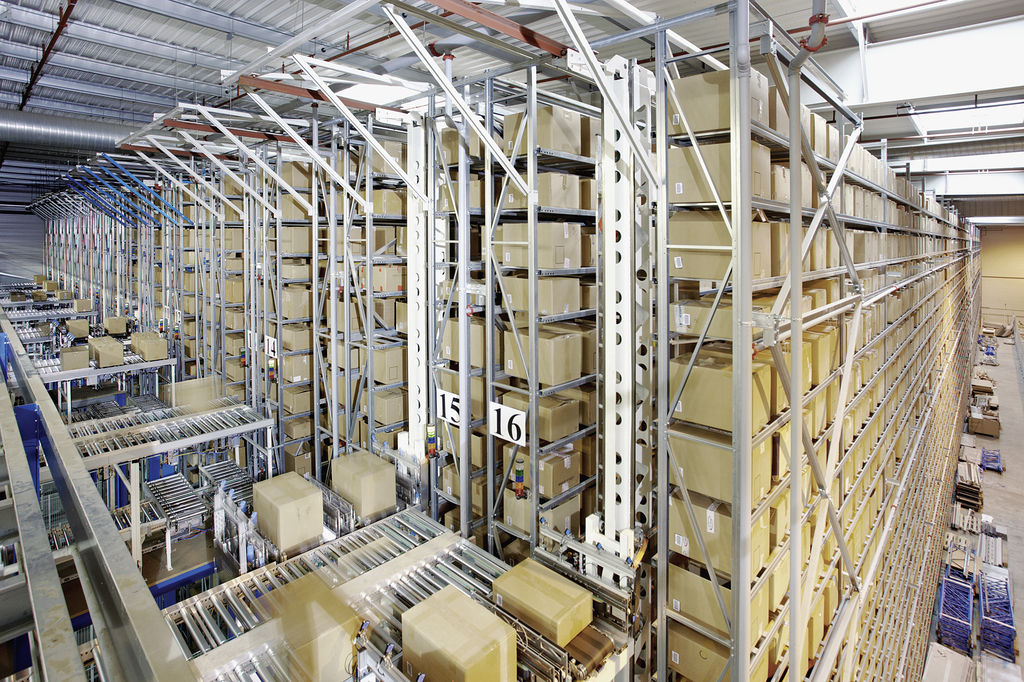 Impressive expansion on the High Street in the last ten years has been matched by a significant increase in on-line sales, bringing total turnover above a billion euros. Some 300,000 individual articles are despatched on average every day from the group’s distribution centres.

Matching Groupe Beaumanoir’s dramatic growth and ambitious expansion plans has required major reorganisation and investment in the logistics services, which are provided by a wholly-owned subsidiary, C-Log, from five warehouses in France and one in China. C-Log also provides logistics services for companies independent of the group.

All five distribution centres in France have been upgraded in recent years, the latest project being at Saint-Malo in Brittany where Gebhardt Fördertechnik designed and installed a state-of-the-art system to handle in-coming stock replenishment and order-picking. A few years before this project, Gebhardt had completed a contract at the nearby Pleudhien DC, which involved installing 16 stacker cranes with single and multi-deep carton handling capabilities integrated with several kilometres of automated conveyor systems. The installation at St-Malo has taken the automation a step further. 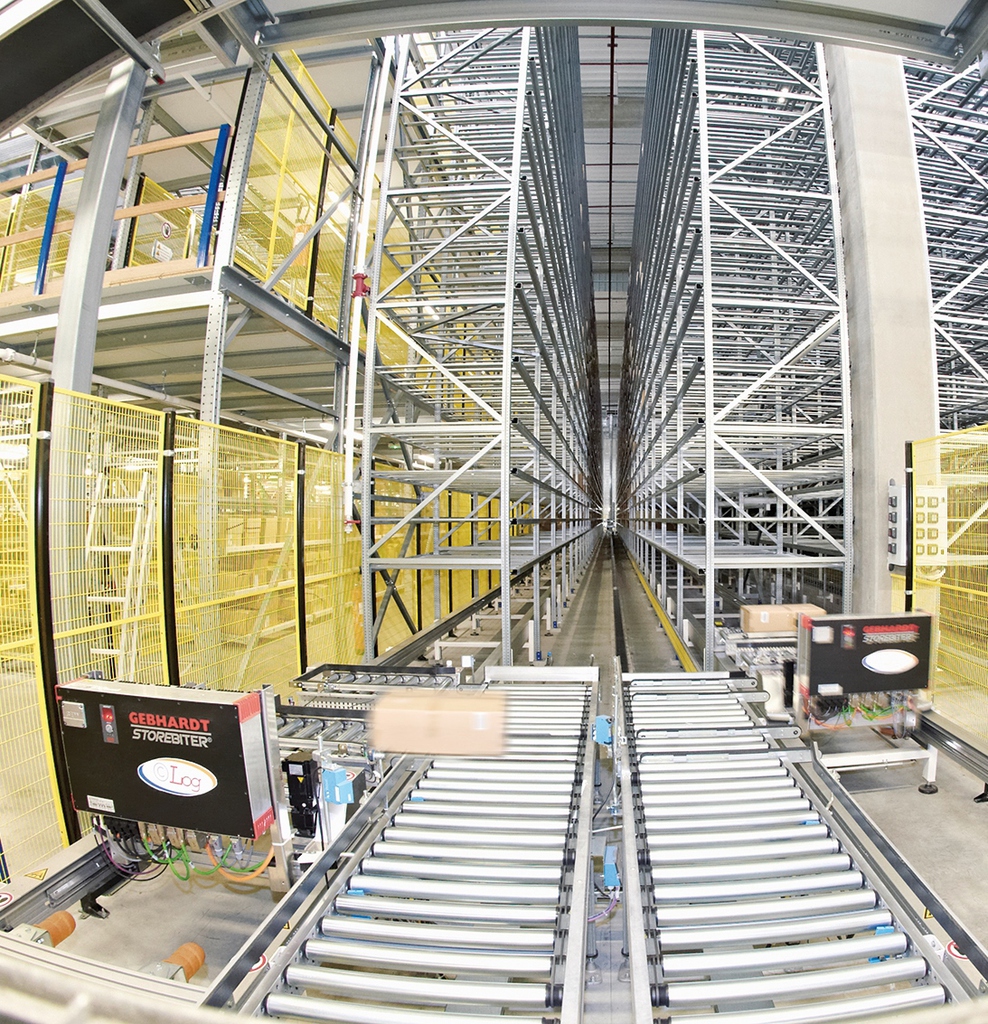 Operations at the 18,000m² St-Malo warehouse had been based previously on manual systems, involving staff walking long distances within the building. The Gebhardt installation has replaced these with advanced automated equipment that has been integrated and co-ordinated in order to optimise the use of the building volume, considerably increase throughput and greatly reduce the manual handling element.

Incoming goods arrive in cartons and are unloaded from delivery vehicles on to telescopic ConBoom conveyors that carry them to a control point where they are examined and weighed. A label with a unique identifying bar-code is applied to each carton that meets specification, while any that require further checking or re-packing pass on to a separate conveyor.

The destination for all in-coming goods is a 100-metre-long x 13-metre-high warehouse with 80,000 storage locations in which Gebhardt has installed a sophisticated high-output handling system for in-coming stock and out-going orders. C-Log required a handling capacity of 1000 cartons an hour, and it was recognised that the use of automated mini-load cranes alone would not meet this requirement, while a shuttle system would be expensive.

The solution has been to combine shuttles and cranes, with the cranes picking from the racking and delivering the cartons to the shuttles for delivery to conveyors that carry them either to the picking area or to replenish a separate racking installation for high-volume items. This design, using Gebhardt’s Dynamic Handover System (DHS), has approximately doubled the output capacity of the warehouse compared with the performance of a conventional system with mini-load cranes feeding conveyors directly and has met C-Log’s throughput requirements without increasing the size of the warehouse.

It has also brought significant benefits in energy usage, because the shuttles are relatively light and use far less power than a crane. They travel at up to six metres/sec, and this speed of operation has reduced the number of miniload cranes needed to five and has also reduced the distances the cranes need to travel. 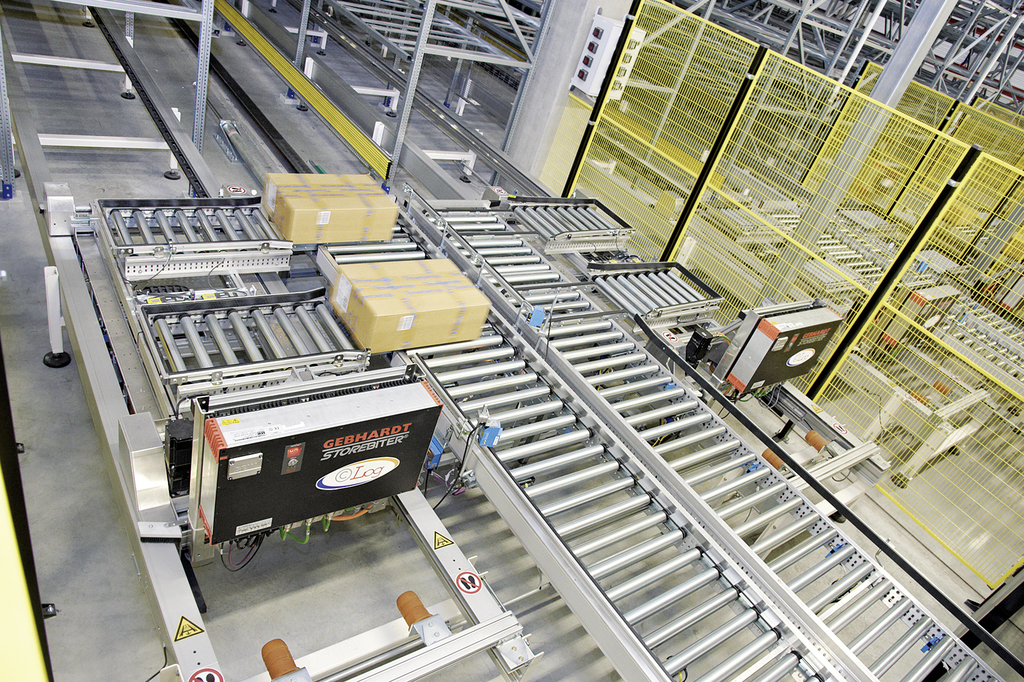 Because of their compact size, it has been possible to route the shuttles below the first shelf of each run of racking, leaving the aisles clear for the cranes to be installed without re-positioning the racking. This layout has also left good access for maintenance and repair, while the built-in drive mechanism and components on the shuttles are designed for long-term use with extended service intervals.

Alongside the main storage area served by the DHS is a separate storage installation for high-volume products consisting of racking on three levels that staff pick from manually, assisted by mobile computer terminals and a pick-to-light system. Product in this section is replenished from the main storage area, using multi-level shuttles that access the rear of the racking.

The DC typically deals with in-coming deliveries in the morning and out-going orders later in the day. The different areas of the warehouse – goods receipt, storage, picking and despatch – are linked by conveyors with bar-code readers that identify each package and automatically carry it to the appropriate destination.

The entire logistics process is controlled by a Gebhardt warehouse management system (StoreWare), which interacts with the DHS system in the main storage area and the shuttle system in the high-volume dynamic picking section. The WMS responds flexibly to changing situations and dynamically adjusts the system so that it always operates as efficiently as possible. Provision has been made for expansion in the future, particularly to deal with expected growth in e-commerce business.

Nottingham-based European Conveyor Systems is a member of the Gebhardt Group. 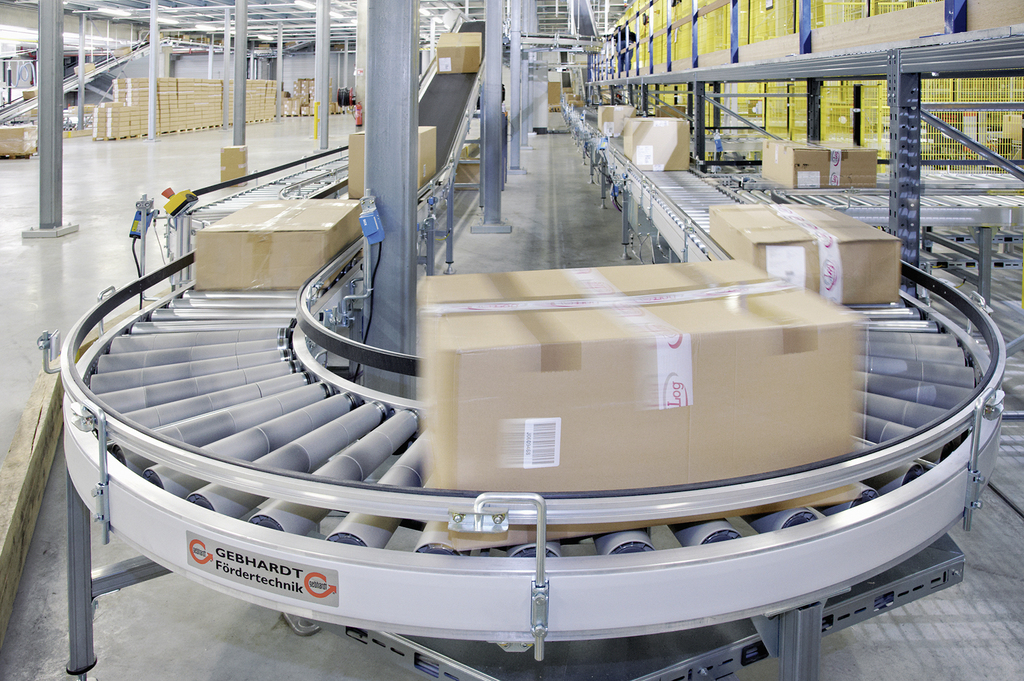