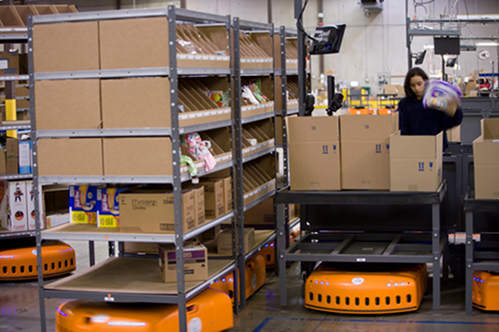 The distinctive orange robots built by Kiva Systems had been seen in the UK at IMHX 2010 and while they were impressive, nifty little things, it wasn’t immediately clear why the technology was worth such a lot of money.

At the time I thought Amazon must have some grand plan for the robotic system. And maybe it still has, but the giant of online retail hasn’t done much with the technology that I can see.

This is at a time when Amazon is spending record amounts of money expanding its warehouse and fulfillment operations, and in doing so imposing as much standardisation as possible.

Indeed Bloomberg recently wrote a comprehensive account of Amazon’s moves in fulfillment and logistics, where it is spending almost $14 billion and notes the Kiva Systems acquisition was something Amazon had not significantly built upon.

The thing is, if Amazon is building warehouses on a huge scale using a different model (one based heavily on sorters), that surely makes it harder to move over to another method (such as using Kiva’s robots).

It could be that Kiva is Amazon’s Veron. For those of you not acquainted with football, Manchester United bought the supremely gifted player Juan Sebastian Veron some years back for a huge sum of money but never found a place for him to flourish in the team. Is Kiva technically advanced but hard to integrate with the rest of Amazon’s logistics operation and in danger of becoming an expensive mistake?