Engineering firm Alstom has taken on a fleet of Yale trucks on a six-year contract hire from Forkway to handle materials for its train servicing and repair operations. 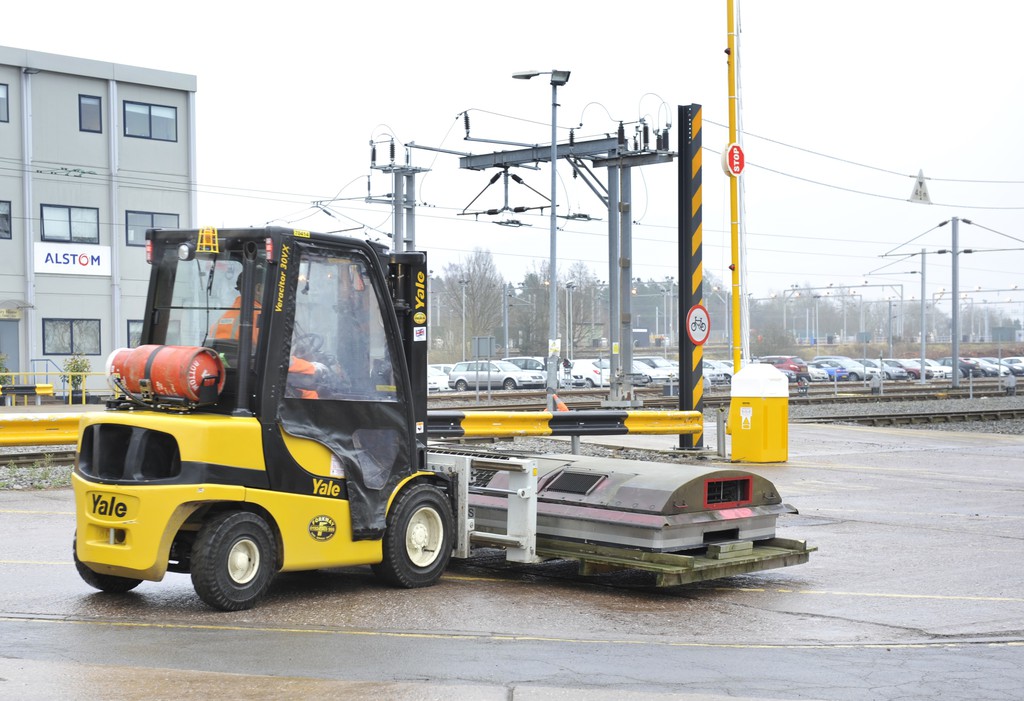 With numerous sites across the UK, the trucks Alstom took on include a variety of gas, electric and diesel-powered counterbalanced trucks. The counterbalanced fleet includes the compact 3.0 tonne capacity ERC30AGF, 3.5 tonne GDP35VX diesels, the LPG powered GLP30VX and ERP35VL four-wheel electrics. Due for imminent delivery to the Glasgow site, are three ERP25VL electric four-wheel counterbalance trucks; while the Wembley site is soon to take delivery of a 1.8 tonne, three-wheel ERP18VT – which was chosen to replace a four-wheel truck because of its exceptional manoeuvrability.

The 3.0 tonne capacity GLP30VX at the Oxley site has been fitted with a hydraulic fork spreader that allows the driver to extend its 1400mm long forks up to 1.9m for handling wide loads such as the HVAC units that sit on top of each passenger car. This saves time and reduces the possibility of any risk to the operator that could be sustained if the task had to be carried out manually.

The 1,600kg truck has been fitted with a half-cab for operator protection when working outside and has also been fitted with LED lights, sound-deadening material in the operator’s cabin, a reversing beacon and alarm, as well as the Techtronix 100 transmission option to meet the application requirements. It has also been supplied with a height limiting proximity device to avoid any possibility of an arc with the overhead power lines in one corner of the site. This restricts the height to which the triplex mast can be raised to 2.5m which can only be overridden with a key held by the fleet manager.

Alstom also specified MR14 reach trucks at the Preston warehouse, which work in narrow aisles to lift heights of around 6.5m.

Given Alstom’s extremely high service levels to its customers, it is critical that its lift truck fleet doesn’t let the operation down. Alstom lead buyer Paul Crowley said Yale is "pivotal to maintaining the trains. At the end of the day, we just couldn’t move the HVAC units around without the right forklift trucks”.

He adds: "They’re not the cheapest trucks on the market - but they’re the ones that fit what we require. We’re very satisfied with the maintenance agreement with Forkway. We have a service level agreement in place that stipulates that if there is a breakdown, they have to respond within four hours – and they’re very good at doing that.”